Super tight corridors. A Maze to get through.

"The Enemy of My Enemy"

"Medium-sized trailer park with lots of cover and flank routes. Fight from all angles."
— In-game description

Trailer Park is a small multiplayer map available in the Resurgence Pack DLC for Call of Duty: Modern Warfare 2.

The map is centered around a mobile home park. The map size is small with tight corridors and run-n-gun type combat. It is reported that set in context of the game, this is the living quarters of the people who run U.S. Vehicle Disposal Yard 437, which is visible in the background. This is the smallest map in the Resurgence Package and one of the most intense for short range combat. Due to the fact that there is no place to give the player a height advantage, Sniper Rifles are very difficult to use in this map.[1][2] 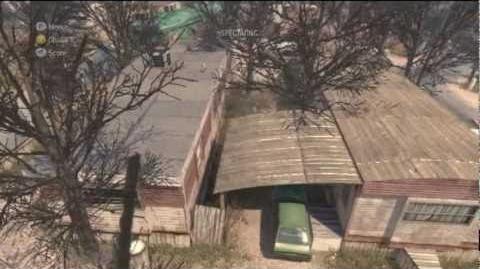 Retrieved from "https://callofduty.fandom.com/wiki/Trailer_Park?oldid=2361986"
Community content is available under CC-BY-SA unless otherwise noted.