"Training" was a planned campaign mission in Call of Duty 4: Modern Warfare. All that proves its existence is a file called "compass_map_training.iwi" present in the game's source files. In the mod tools, in the "raw/English/localizedstrings" folder, a file called "training.str" includes information about this mission. The mission was replaced by the SAS training mission. The extended SAS training (which was cut and replaced by a shortened version, probably in the last moment, as dialogs and objectives have just been cut, and the places where those objectives are completed, still are in the final training) contains many elements from this one, like blowing up a car.

From the mission's planned string file, the player would control PFC. Michael Carver of the U.S. Marines. The mission would most likely be the first in the game, as it is the training mission. The player would go through the following training assignments:

The player is taught how to use the compass and objective locater.

Other misc. strings in the file: 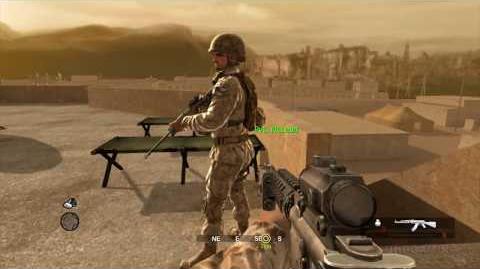 Retrieved from "https://callofduty.fandom.com/wiki/Training_(Call_of_Duty_4)?oldid=2541238"
Community content is available under CC-BY-SA unless otherwise noted.