The Trample Steam is a buildable device featured in Call of Duty: Black Ops II and is mainly featured in the Zombies map Die Rise, Buried and Borough. Once obtained, it can be placed anywhere on the ground. It will take a brief moment to adjust itself, but once it has been configured, any zombie, Jumping Jack  or player that steps onto the mechanism will be flung a short distance. A Trample Steam activated by a zombie will reset almost instantaneously whereas a Trample Steam activated by a player will take a few seconds to reset. Much like the Turbine and the Zombie Shield, zombies can get stuck in the Trample Steam whilst it primes itself, and it will eventually break from either overuse or their interference.

In Die Rise, it is found either on the lobby desk, or in the corner next to the collapsed stairwell, and in Buried, it is found on the shelves in the middle of the main room in the general store, on the shelf below the half-fallen shelf.

In Die Rise, it is found either halfway up the stair on the left side of the lobby, or straight ahead leaning against the wall to the right, and in Buried, it is on the table in the back room on the second floor.

In Die Rise, it is found either next to a broken chair at the bottom of the right-side stairs in the spawn room or next to the top of the escalator, leaning against the rail, and in Buried, it is found in a barrel below the staircase. 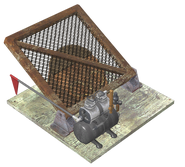 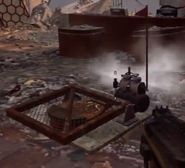 The Trample Steam built on its table. 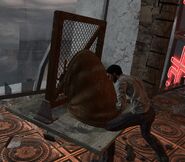