Call of Duty Wiki
Register
Don't have an account?
Sign In
Advertisement
in: Call of Duty: Black Ops II Gametypes

Survive for as long as possible against limitless waves of the Undead.
Obey the voices

"Continue the fight against the undead and search for clues to the truth of what lies ahead..."
— Description

TranZit functions like any other Zombies maps aside from the size of the map and some of the new utilities. A new feature, buildables, allows the player to pick up parts and construct certain items, which offer useful mechanics to aid the survivors in game. Examples include the Pack-a-Punch Machine; a new Wonder Weapon, the Thrustodyne Aeronautics Model 23 (commonly referred to as the Jet Gun); a turbine-like handheld power source; an electric trap; an improvised automatic machine gun turret; and a Zombie Shield, the Zombies variant of the multiplayer weapon, the Assault Shield.

The player can also add upgrades, such as ladders and plows, to the bus to aid them by preventing zombies from breaching the bus, or allowing access to the bus roof. Two new types of enemies appear, the Denizen and the Avogadro.

Note: The bus does not stop in the tunnel, as it is not a destination.

Zombies can latch onto it while it is in motion, and players can climb up to its roof or fight inside the bus to defend it. Another method of transport is teleportation. The player can do this by taking a Denizen under the green lamp posts found throughout the map and jumping into the portal it creates.

New persistent effects, called "Perma-Perks" by the community, are a new feature in TranZit as well as Die Rise and Buried. Not all of these effects have been discovered, nor is there an exact explanation on how to get them.

These upgrades stack with any Perk-a-Colas, meaning the player can get even faster revives by obtaining the appropriate upgrade and buying Quick Revive.

When the player obtains an upgrade, a green flash will appear on the screen, and the character will comment about it. When a player loses an upgrade, the game will play an eerie noise.

Another major feature is the ability to share points in TranZit. To do this, a player must find a drawer with tags such as the one inside the bank vault. They then have to hit it with the Galvaknuckles or pack-a-punch Ballistic Knife After doing this, the player can deposit 1100 points in the safe, which will cause a 1000 points power-up to drop, which any other player will be able to pick it up.[1] The orb looks like a point drop from Dead Ops Arcade or the bonus drop by the QED from Moon.

If a player is standing where the drop will appear when a player deposits 1100 points, the money will be lost and no-one will get it.

A view of the Jet Gun.

Zombie Shield, The equivalent of an Assault Shield.

Marlton, one of the new characters.

Misty, the girl seen on the Zombies teaser poster.

Zombies at the Diner.

Bus stop of the cabin that leads to the power switch room.

View of the bar found in Town.

An overview of TranZit. 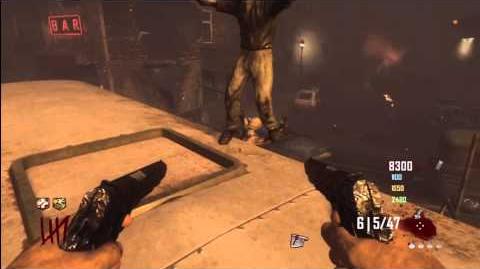 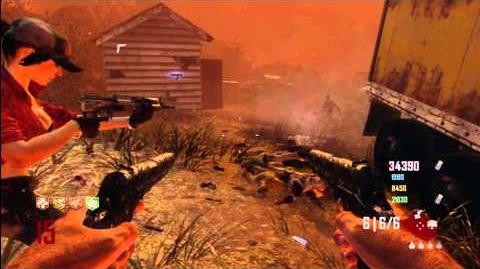 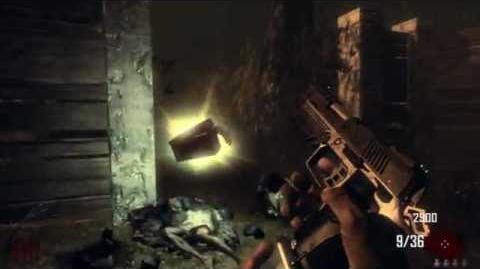 Black Ops 2 Getting to Nacht Der Untoten on Tranzit (Zombies Easter Egg)
Tutorial on how to get to Nacht der Untoten. 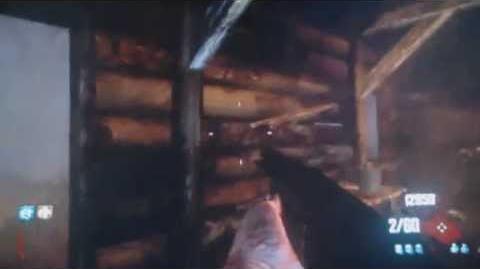 How to get a free max ammo in Tranzit
Tutorial on how to do the free Max Ammo easter egg. 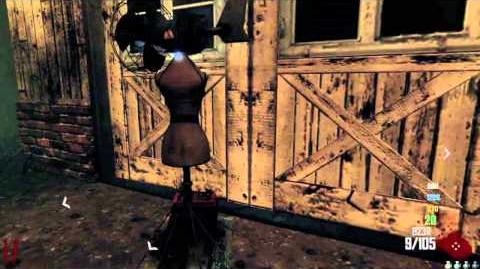