The Trinity Rocket is an Assault Strike Chain reward in multiplayer. It is obtainable at a 7 point streak or 6 with the Hardline perk. It allows the player to control a missile fired from above, similar to the Predator Missile and Hellstorm Missile, with two smart drone projectiles that can be fired at different targets before being able to boost the missile itself to the ground. The smart projectiles will track the nearest enemy it is fired at. The rocket also has a larger blast radius when a smart projectile isn't fired.

It is available in Multiplayer, Squads Mode Safeguard, and Extinction. 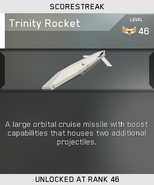 Trinity Rocket being unlocked in multiplayer.