Russian Army troops or the collapse of the diamond mine (presumably)

Sergeant First Class "Truck" was a Delta Force operator who followed "Team Metal", a callsign of the Delta squad, throughout Call of Duty: Modern Warfare 3. He was second in command of Metal team and appears through the Delta Force missions. He along with Sandman and Grinch sacrificed themselves during a firefight against Makarov's men to save Price, Yuri and Russian President Vorshevsky in the mission "Down the Rabbit Hole". As the latter three were extracted, the mine collapsed, presumably killing Truck, Grinch and Sandman.

In Black Tuesday, Truck can be seen throughout the mission assisting Frost and other members of Team Metal. Truck is seen in the beginning of the mission fending off Russians in the street. Soon after advancing, an enemy helicopter arrives, forcing Team Metal to head inside for cover. After Frost and Sandman clear the area, Truck and Grinch move up to a store where they run into some company. With overwatch from Grinch, Truck assists in clearing the store with Frost and Sandman. After Metal clear the store they find some friendlies outside. The friendlies turned out to be Anvil team consisting of Thumper, Worm, and Grizzly.

Then the Delta members they met covered them while they took out the jammer in the Stock Exchange. Finally after reaching the jammer, they clear out the location and destroy the jammer with thermite. They then hold their position while waiting for evac. After holding their position they finally evacuated on a Black Hawk, where the team escaped pursuing Russian Hinds.

Truck wasn't present in the Hamburg operation, though he was present for the Battle of Paris, albeit being at a safe distance while his teammates Grinch, Frost, and Sandman went hunting for the mastermind of the bombs, Volk. The trio, with the assistance of the GIGN, managed to capture Volk. Raptor 2 dropped off Truck, along with Gator, to help with the extraction efforts, but it was shot down moments later. During the ensuing battle, Truck and the others managed to get Volk to U.S. authorities, who subsequently interrogated him. This prompted the Disavowed Task Force 141 to go hunting for Makarov, Volk's employer, in Prague.

Days later, after the Death of John "Soap" MacTavish in Prague, and the discovery of Makarov in a castle, Truck and his team were deployed to Berlin to find and secure Alena Vorshevsky, who was trapped in a hotel, swarming with hostile Inner Circle troops who had managed to overpower her security detail that was with her. Team Metal, including Truck, raced to secure a building nearby, which they did, and proceeded to provide overwatch for Team Granite, who was sent in to secure Alena. During the ensuing fight, Truck located three T-90 tanks that were firing on Team Granite. A quick intervention from an A-10 Thunderbolt codenamed "Valkyrie 2-6" saved Granite from being killed. Truck gave the go-ahead for Granite to breach the fifth floor room where Alena was located in. Granite proceeded to head inside, and to the shock of the team, they were all killed. The foursome linked up with a German tank column and headed for the building, but a rigged building to the side neutralized the tanks and forced Metal to go on without support. Truck and his team fought their way through the remaining Inner Circle troops in the building and assaulted the third floor room where Alena was being held. Truck and his team were stopped by a rigged doorway and were unable to save her from being captured. However, they did manage to track the helicopter to a diamond mine in Siberia.

Truck and his team deployed to the Siberian diamond mine with Captain Price and Yuri of the disavowed Task Force 141. Together, they infiltrated the mine using an elevator and managed to stage an ambush on Inner Circle troops holding Vorshevsky and his daughter captive. Truck and the team suffered a loss; McCoy, who was Frost's replacement, was hit and killed by an RPG-7 round in the elevator during the infiltration. Truck and the team pushed on despite the loss, and after receiving air support in the form of a UAV Predator and multiple Little Birds carrying Team Viking and other units, courtesy of Overlord, the team made it into a room where Alena was being held. Truck managed to locate President Vorshevsky, after the tortured Alena weakly pronounced his location. While Team Viking stayed behind to secure Alena, Team Metal and Task Force 141 went down deeper into the mine to save the President, which they were able to do successfully.

However, the battle had taken its toll on the mine, and the team was forced to evacuate via a Black Hawk, but due to a massive counterattack of hostile forces coming through other gateways, the team was rushed. Price assisted President Vorshevsky on board, but Yuri was badly wounded by an RPG round, and had to be dragged onboard by Price. The evac chopper came under RPG fire, and was forced to take off with Price, Vorshevsky, and Yuri on board, but with Sandman, Grinch and Truck still on the ground. The mine began to crumble due to the heavy fighting, and Sandman ordered the Black Hawk to leave. This did not sit well with Price, who protested with the pilot to get back down to save Team Metal. The pilot responded by saying if they went back, they would all die. The mine finally collapsed, killing everyone still inside including the Ultranationalists and presumably Sandman, Truck and Grinch, while Price, Yuri, and President Vorshevsky barely escaped in the Blackhawk.

Truck with Sandman and Grinch.

Truck using a chainsaw to open a door in "Down the Rabbit Hole". 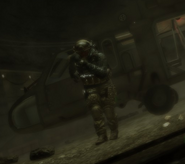 Truck running to get a wounded Yuri.

Truck in "Down the Rabbit Hole".

"Ahhhh, someone brought their own toys to the party."
— When the player grabs the hidden AK-74u on the Special Ops mission, Stay Sharp.