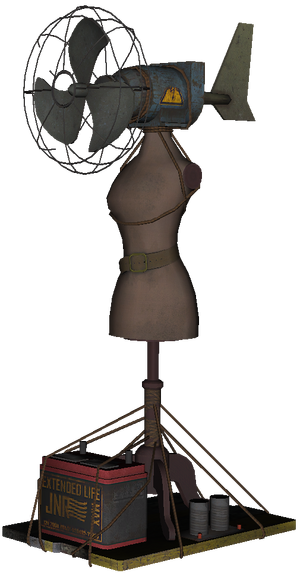 The Turbine is a buildable item that can be made in the new TranZit mode and Buried map of Call of Duty: Black Ops II.

In Tranzit, this piece spawns up against the triangular map in the starting room, and in Buried it is in the back right corner, in the back room, on the main floor of the general store.

In Tranzit, the Fan spawns on a seat opposite the crafting bench, and in Buried, it is located in the back room, on the second floor, to the immediate right, on a desk.

The most obscure of the three pieces, in Tranzit, the Tail spawns to the right of the bookcase in the starting room, on the floor. It is behind the the Mannequin's spawn point, next to the M14. In Buried, it is located on the set of shelves on the far left, on the main floor of the general store, when entering through the front door.

Retrieved from "https://callofduty.fandom.com/wiki/Turbine_(Zombies)?oldid=1969831"
Community content is available under CC-BY-SA unless otherwise noted.