"Turbulence" is the fifth mission of Call of Duty: Modern Warfare 3. The player starts off as Andrei Harkov, an FSO agent, on a plane with the Russian President, Boris Vorshevsky, speaking to his daughter about the peace conference in Hamburg.

Harkov, one of the President's bodyguards on his protection detail, enters a room with President Vorshevsky, who sits down with a group of men discussing the peace he wants to create with the west. As President Vorshevsky is arguing with Vasili Zhukov, he is interrupted by muffled gunfire; at this point the plane is attacked by hijackers, in an attempt to capture the President.

The President hits the floor with agents covering him, and the player is tasked with defending him. Three hijackers assault the room, but Pudovkin and Harkov dispatch them in close-quarters combat with their service pistols, the Five Seven. The agents start to move the President to the plane's safe room. They move through the plane's interior, and as they near a staircase which is the scene of a battle between agents and hijackers, the plane stalls, sending it plummeting towards the ground. This puts the inside of the plane in a temporary state of zero gravity in which Harkov and the other agents frequently smash into overhead compartments. During this period of no gravity, the agents are able eliminate the hostiles.

After clearing the room of all the hijackers, the agents move downstairs, and fight their way through the kitchen, the operations room, and the cargo bay to rescue Alena Vorshevsky, the president's daughter. The FSO team start to move the President and his daughter to the safe room, but before they can do so, the plane is forced to make an emergency landing. As hijackers pour in to engage the agents, the plane crashes into the ground. The force of the crash tears the plane in two, and the hijackers are still attempting to kill the agents when the portion of the plane they are in hits an air control tower. Federov falls from the plane, and an engine from the plane hurtles through the air, striking the portion of the plane Harkov is in, knocking him out.

Pudovkin drags Harkov onto his feet, and the two stumble out of the wreckage. After exiting the remains of the plane, the agents search for the now missing President. Moving past wounded agents and hijackers, they approach a hangar. Hijackers in armored vehicles start to fill the area, and the agents are forced to use wreckage and luggage as cover. Once the security team secures the President, a helicopter lands to evacuate the President. After opening the door to the helicopter, Harkov discovers that it belongs to Makarov, who then proceeds to shoot him, as well as Pudovkin, and captures the President. Harkov and Pudovkin fall to the ground, Makarov effectively killing Pudovkin with another shot. While Harkov is lying on the ground, wounded, he can overhear a conversation between Makarov and President Vorshevsky.

Makarov demands the launch codes to secure his dominion over Russia, exclaiming "Russia will take all of Europe, even if it must stand upon a pile of ashes". However, the President refused to give up the launch codes, instead calling Makarov insane. Furious with his stance, Makarov ordered his men to find Alena, stating "Every man has his weakness. Find the girl". As Harkov tries to reach his gun, Makarov, noticing his movement, shoots him a second time, killing him. 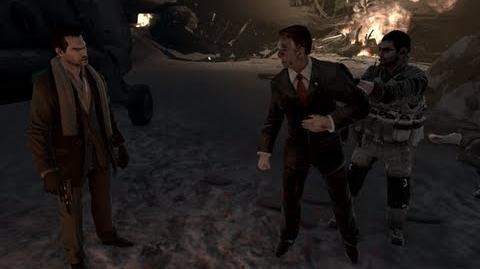 12. In the cabin at the beginning of the mission, go down a set of stairs. Keep going straight; after entering a kitchen area. the intel is on the right on top of a counter.

13. Once the plane has crashed, continue forward, a large tree is in the way and has to be jumped over. Just on the other side of the tree, sitting in the snow, is this piece of intel. 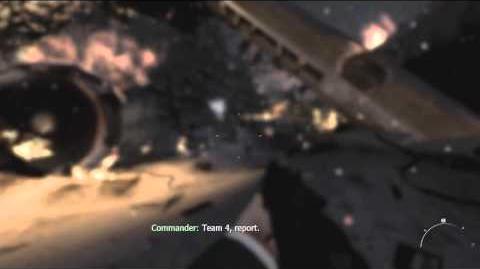 Harkov and his colleague in the President's quarters.

The crashed back end of the plane.

Alena being secured after the crash.

Makarov demanding the launch codes from the President.

Makarov mercilessly shoots the Commander at point-blank range, killing him. Note the position of the Makarov's Five Seven.

Several Mi-8s can be seen after Makarov shoots Harkov.

Pickup icon of the Five Seven during Zero-G sequence.
Community content is available under CC-BY-SA unless otherwise noted.
Advertisement