All In
No Fighting In The War Room

Two-Six Team are a 4-man Marine fireteam who assist the SAS team on the assault on the Control Room in the level "No Fighting In The War Room". They first appear in "All In", after the player destroys the Ultranationalist APCs, rappelling from a Blackhawk helicopter. Two of their mentioned names are Two Yankee Six and Five Delta Six. If one looks down the grates in the vents while the player is still in them, the player can see some of the Marines fighting the Ultranationalists. 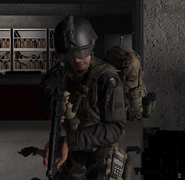 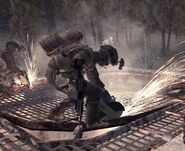 Two-Six Team using chainsaws to get into the ICBM facility
Community content is available under CC-BY-SA unless otherwise noted.
Advertisement