The Type-2 (referred to as Spurita in the game files) is a Fujiwara hybrid energy assault rifle featured in Call of Duty: Infinite Warfare, capable of alternating between an assault rifle mode and a dual wieled machine pistol mode.

The Type-2 is one of the more versatile weapons in the game, killing most human enemies in 5-6 shots, although difficulty can be a factor in enemy resistance. It is part of the recommended loadout for the mission Operation Dark Quarry, where it comes with a Scout sight, Foregrip and Particle Amp.

When all side missions are completed, the Type-2 unlocks the Akimbo Shotguns upgrade, which turns both akimbo pistols into short-range energy shotguns.

In multiplayer, the Akimbo Shotguns appear as the Epic gun perk Eighty Seven.

The Type-2 is a fully automatic, energy based Assault Rifle, unlocked at level 22. The Type-2 has the lowest base damage of any primary (and amazingly, even any secondary) weapon in the entire game - a very modest 23 damage per shot even at point blank, or 5 shots to kill - only better than the VPR when said SMG misses one of its two bullets per trigger pull. Having said that, the Type-2 has many benefits that make it competitive with other Assault Rifles, despite the very low damage of the weapon. The Type-2 has an integrated ELO sight, with the main twist of the weapon being that it can split into akimbo machine pistols. The Type-2 features a unique ability to be able to be split into dual wielded machine pistols with reduced damage, firing at a combined rate of fire of roughly 1400 RPM, making it very deadly at close range. Alternatively, the Type-2 has the longest damage drop-off range at 56 meters, making it very consistent, unless shooting across the map. Without Dexterity however, the Type-2 sports a sluggish reload in Assault Rifle mode. Because the weapon is a hybrid weapon, the VMC sight is not a very good choice on the Type-2, seeing as multi-mode attachments contradict the duality of hybrid weapons, and therefore the attachment's mode cannot be changed. It can sometimes be viable, seeing as the hybrid Akimbo mode of the Type-2 somewhat negates the unwieldy increase to zoom by the VMC sight in close quarters combat.

The Type-2 is available from the Magic Wheel for 950 points. It can also be found on the wall in Rave in the Redwood for 1250 points. It is available for customization at level 32. Early on in Infinite Warfare's life cycle, it was found that equipping the Fusion mag on the Type-2 allowed it to actually regenerate ammunition out of thin air. This was later patched, so the Fusion mag is in line with the other Energy Weapons, taking bullets from the reserve.

A strange glitch occurs when alternating the modes of the Type-2. As the weapon breaks into two, the magazine sizes of the separate SMGs remain the same. However, when reverting back to Assault Rifle mode, the magazine size is doubled. This is very potent after upgrading the Type-2, as around 100 rounds will be available for the player to dispense.

The main feature of the Butcher variant is that the automatic pistol mode when splitting the Type-2 is converted into a dual shotgun mode. In Multiplayer, this comes at a large cost because of the short damage range as well as the shotguns only holing seven rounds each, making reloads frequent as well as consuming more than four times as much ammunition. Furthermore, the shotguns are semi-automatic compared to the original pistols being fully automatic.

In zombies, the trade-off of damage range is less severe, especially considering the close quarters nature of the mode as well as the fact that the magazine size remains the same as the original pistols. Also, the shotguns are fully automatic in this mode. The Butcher has decent power in early rounds up until around the round count reaches the later twenties where power becomes encumbered and other options may be considered.

The Type-2 in first person

The Type-2 in Akimbo mode

Aiming down the Type-2's sights 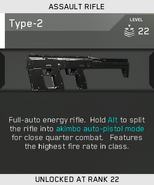 Retrieved from "https://callofduty.fandom.com/wiki/Type-2?oldid=2486463"
Community content is available under CC-BY-SA unless otherwise noted.