For other uses, see Type.

The Type 100 is a Japanese Submachine Gun found in the entire Pacific campaign, with the exception of Black Cats. It has low recoil, moderate power, and is a staple in the Japanese war machine. The Type 100 has a thirty-round magazine and more abundant ammo compared to the Thompson, which has a smaller 20 round magazine and often runs out of ammo due to the rarity of dropped Thompsons from dead allies.

While the Thompson has more power, players usually tend to trade it for a Type 100 after ammunition has run out. The Type 100 can be used as back-up for a long range rifle such as the Arisaka or M1 Garand and, like all submachine guns, is highly effective at close range.

Japanese soldiers use this gun most frequently besides the Arisaka. Japanese soldiers will also charge with the gun. This gun can be found leaned against walls and usually on dead Japanese.

In multiplayer, the Type 100 is a commonly-used weapon with well-rounded stats; it possesses: a high rate of fire, low recoil, decent damage at close range, and a 30-round magazine. At most, the player can carry 160 rounds for the Type 100. However, since 160 is not divisible by 30, the last magazine will only be loaded with 10 rounds. It excels with a Suppressor, as its high rate of fire, and low recoil, compensate for its lack of range. The Type 100 also has: the highest damage output in the game (at close range), good hip-fire accuracy, high mobility, and a fairly quick reload. Consequently, it is extremely powerful in close quarters, like all other Submachine Guns featured in the game.

The Type 100 can kill with three shots, at close range, but needs four to five, at medium-long range, without Stopping Power. With said perk, the Type 100 kills, with only two hits, at close range, and three to four, at longer ranges. Unfortunately, its iron sights can be fairly hard to use, especially with the muzzle flash reduced only by a Suppressor. For this reason, the Suppressor, or Aperture Sight, makes tracking targets much easier, while shooting. It should be noted that with the Aperture Sight, the gun is not slanted. It is also important to note that the Type 100 and the Thompson have virtually the same range, rate of fire, recoil, and damage, although the Type 100 has noticeably lower penetration, and a larger magazine.

Without the Box Magazine attachment, the Thompson reloads and reload-cancels faster; with the Box Magazine, the Type 100, overall, statistically outshines the Thompson. The Type 100 deals identical damage to the Thompson, but with less penetration, making it less suitable for shooting through walls/cover. This can be remedied, with the Deep Impact perk, however.

The Type 100 is featured in the Nazi Zombies maps Shi No Numa and Der Riese, it is available for purchase off the wall in both maps for 1000 points or from the Mystery Box in both maps. It is the only Japanese weapon available in Der Riese. It is an overall decent weapon, with similar statistics to the Thompson, with the main differences being magazine size and penetration capabilities. Because of the Type 100's high rate of fire, Double Tap Root Beer is not particularly useful. It comes with 160 rounds of carried ammo, noticeably less than the Thompson's 200 rounds. This combined with its fire rate means that it tends to chew through its ammo fairly quickly, something any player should take into account when formulating a strategy involving this gun.

When upgraded, it becomes the "1001 Samurais". The 1001 Samurais possesses an increased 60 round magazine capacity, a maximum of 220 carried ammo, doubles its previous damage, and a slight increase to its firing rate. Again, it is very similar to the Gibs-o-Matic (the upgraded Thompson), however the Gibs-o-Matic is seen as superior because it can penetrate multiple enemies (a feat the 1001 Samurais is incapable of performing). Speed Cola is recommended when using both versions of the weapon.

The Type 100 also appears in the iPhone/iPod touch version with a few differences. First of all, it has a different amount of ammo. Instead of 30/160 it has 20 rounds in its magazine and 200 in reserve (the same as the Thompson) It also has a slower rate of fire making double tap root beer a good choice. Lastly, the gun is available in all the maps from the mystery box, unlike the console/PC version where it is only available in Der Riese and Shi No Numa. The upgraded version hasn't changed.

The Type 100 is available in the Nintendo DS version of Call of Duty: World at War as one of the six obtainable SMGs in game, the others being the Thompson, Sten, PPSh-41, the Lanchester and the MP-40. Like all DS weapons, it bears similarities to its console/PC counterpart. Similar features include the general appearance of the gun, the 30 round magazine, same reload animation, and similar iron sights. Differences include a lower rate of fire, higher recoil, and higher minimum damage in the campaign. Like in the console versions, the Type 100 has nearly the same stats as the Thompson, just with higher recoil.

In single player, the Type 100 is only available in the American campaign missions, being the only obtainable Japanese submachine gun (and the only obtainable Japanese weapon at all). Due to the large abundance of this weapon, it is nearly impossible to run out of ammunition, an advantage which its rival, the Thompson, doesn't possess. Similar to the Thompson, the Type 100 is able to kill in a maximum of three shots at any range; two shots if both hit the enemy at chest level. The Type 100 also has high vertical recoil, which makes it difficult to use at range, though this can be easily countered by moving the stylus downwards when going full auto.

In multiplayer, the Type 100 is only available if choosing the Imperial Army as their faction. Like most weapons in multiplayer, its damage is reduced, but not by a large amount, as it is capable of killing in four shots at any range, one shot more than the single player variant. Due to the moderate damage, high rate of fire (compared to other weapons in game), and manageable recoil, the Type 100 is one of the most powerful SMGs, just behind the PPSh-41.

The Type 100 appears in the IOS game Call of Duty: Zombies. Unlike its World at War counterpart, the Type 100 has a lower magazine capacity and larger reserve ammunition pool, sharing the same amount of ammunition as the Thompson.

The Type 100 is also present in Call of Duty: Black Ops. It is found in the remastered versions of Shi No Numa and Der Riese. It can be purchased off the wall for 1000 points. The Type 100's appearance hasn't changed (aside from being somewhat shinier), and the weapon's stats are the same as in Call of Duty: World at War. However, the 1001 Samurais has much more engraving than before. The Type 100 can no longer be found in the Mystery Box, as it now only contains post-WWII weapons. The Type 100 is good for scoring points due to its low recoil.

Unlocked at level 11, the Type 100 is the most accurate of the submachine guns at range, providing little recoil per shot, which can be almost mitigated with the use of a Grip. Its damage and range are fairly low, scoring four hit kills at close range, five at mid range and six shots at long range. Due to its extremely high accuracy, even with Rapid Fire equipped, it is commonly used in Hardcore modes. The theoretical close and long range TTK is somewhat slow, due to the slow fire rate compared to most other SMGs in the game, but other SMGs do not possess the Type 100's good mid range capabilities, being a trade off for poor close range TTK.

The iron sights of the Type 100 are rather clean, however can still pose minor benefit from the use of a Reflex Sight or a Lens Sight. The Grip is useful in enhancing the Type 100's accuracy, and the Quickdraw allows the player to aim down sights more quickly, which can prove useful in close range encounters. Steady Aim is also useful, as it enhances the Type 100's close range performance and puts it on par with the faster-firing PPSh-41 .

The Type 100 is fairly weak past round eight due to its low damage per shot. However, its accuracy, fire rate and low recoil lend itself to be a viable personal defense weapon at earlier rounds, as well as being able to earn the player a large amount of Jolts as multiple headshots can be attained with relative ease. Ammo capacity is a concern however, featuring only 150 rounds of extra ammunition with the 30 rounds in the magazine. This concern is mitigated however, as the presence of the accessible weapon locker purchase for the Type 100 as well as the cheap price to purchase more ammo at 380 Jolts lends the ammo capacity issue as minor. If the player purchases Kugelblitz, the Type 100 becomes effective until waves 14 and up, but headshots can increase the Type 100's effectiveness, while still being good at earning jolts.

When upgraded through the Ubersprengen, the Type 100 becomes the Blood Type, complete with an increased magazine size to 60 rounds, as well as an increase to 360 rounds in reserve. The upgrade also increases the damage dealt per bullet, however is rendered as a somewhat weak weapon at roughly round 16, but still retains favorable handling statistics. Again, the Type 100's damage output is bolstered by Kugelblitz, which can greatly increase the weapon's damage output. The Blood Type is not suitable against stronger zombies such as the Wüstling from the front, but should the player get a clean shot on its back, the Blood Type can easily take it out, especially if the player is at range. Otherwise, the player should be using a more powerful weapon such as a LMG to defeat other stronger zombies such as the Brenner.

The Type 100 in first person 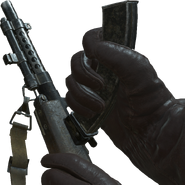 The Type 100 returns in Call of Duty: Vanguard.

The Type 100 is Wade Jackson's weapon of choice through the campaign, and is prominently used by the Imperial Japanese Army in "Numa Numa Trail".

The Type 100 can be brought into any map via Create-A-Class, at Loadout rarity and can be found at any rarity via the Mystery Box for 950 Essence. When upgraded via the Pack-a-Punch Machine, it becomes the Blood Type Z.