David Mason uses the Type 25 in Cordis Die with a Reflex Sight as part of the recommended class. The Type 25 also appears in the mission Judgement Day.

The Type 25 is the second weapon in the assault rifle category, unlocked as soon as Create-a-class is unlocked, but still requires an unlock token.

On the contrary, the Type 25's rate of fire is fantastic, at 937 RPM. This is the highest such value in the assault rifle class, and the second highest default rate of fire in the game. This makes the Type 25 competitive at medium ranges and close quarters combat.

Accuracy is moderate on the Type 25. The iron sights are of an unusual form, but easy enough to use. The recoil per shot goes up and to the right, with minimal kick to the left. The Type 25's centerspeed is also fantastic, at 1700. Although the Type 25's rate of fire is high, the recoil is very controllable, and players can comfortably shoot the Type 25 fully automatic at medium ranges. Although the recoil profile is small, the rate of fire is too high for long range engagements, and going full auto at such a distance will easily cause the gun to drift off of target.

The Type 25's handling characteristics are great for an assault rifle. The Type 25 has the best base movement speed in its class, at 96.5% of the base speed, 1.5% higher than the other assault rifles. However, the strafe speed remains the paltry 40% standard mark for assault rifles. The hip-fire spread of the Type 25 is also the smallest in its class, having a slightly tighter hip-fire spread. The Type 25, however, has some of the slower reloads in its class, taking 2.375 seconds to do a partial reload, 3.05 seconds to do an empty reload, and 1.7 seconds to perform a Reload Cancel. These reload times aren't bad overall, but remains only faster than the lethargic SMR in the assault rifle class. The enhanced rate of fire and low damage also means that the Type 25 will make reloads frequent.

The Type 25 has the standard 30 round magazine capacity and 120 round starting ammo loadout.

The standard assortment of attachments are available to the Type 25.

The Reflex Sight provides a basic alternative to the iron sights. This attachment's value entirely depends on if the user is content with using the iron sights are not.

The Quickdraw Handle is a very nice attachment option for the Type 25, as it cuts the aim down sight time in half. Users can snap onto target very quickly, an attribute that very much suits the Type 25. The Type 25 is best used in a more aggressive role to take advantage of its superior handling traits, and the Quickdraw Handle improves aggressive capability. The Adjustable Stock heavily improves the Type 25's strafe speed to 80% instead of the poor 40%, allowing for quick movement when strafing. This attribute gels very well with the Type 25's aggressive playstyle.

Fast Mag decreases the reload times of the Type 25, making reloads much more tolerable. The Type 25 chews through ammo quickly, and as such, this attachment will prove to be very popular with many. Fast Mag will also increase the rate at which the underbarrel Grenade Launcher reloads, if it is equipped. As such, Fast Mag is extremely valuable if using the Grenade Launcher. On the other side of the coin, Extended Clip will increase the Type 25's magazine capacity from thirty rounds per magazine to forty rounds, and increase the starting ammo loadout from 120 rounds to 160 rounds. Extended Clip can be a nice alternative to Scavenger should one not want to use said perk.

The EOTech Sight and ACOG Scope provide higher zoom alternatives to the iron sights, allowing for clearer definition at longer ranges. Both also provide an accuracy increase in the form of a very slight centerspeed bonus. These two attachments are best left for weapons that'll see the bulk of their usage at medium to long ranges, which the Type 25 isn't suited for.

The Foregrip provides a tiny centerspeed increase, comprable to the increase the ACOG Scope gives. Although the Foregrip has no intrinsic downside, the benefit it gives is so small that it's a waste of an attachment choice regardless.

The Target Finder gives a longer ranged, target acquiring sight that illuminates those without Cold Blooded with a bright red diamond. This allows for easier target acquisition, especially in dark rooms. However, this attachment, like the EOTech Sight and ACOG Scope, are best left to longer ranged weapons.

Select Fire enables the Type 25 to be fired in a burst fire configuration. When used in the burst fire configuration, there is no burst delay, and the Type 25's centerspeed is increased to 1800. This makes the Type 25 even more accurate at medium to long ranges and can assist in ammo conservation. That being said, the attachment's worth is questionable, as the Type 25 doesn't have great damage for medium to long range engagements. Still, the extra 100 centerspeed alone makes this attachment worth a look.

The Suppressor is an excellent fit on the Type 25, as the rate of fire is high, the differential in maximum to minimum damage is small, and the Type 25's accuracy is good. The Suppressor allows the Type 25 to effectively be used as a stealth weapon.

FMJ is an ill fit on the Type 25. FMJ brings its usual benefit of increasing the penetration power. The issue is that the Type 25 isn't geared towards being used with FMJ. The Type 25's damage isn't that great, and it isn't designed to be used in a defensive role, where FMJ is best utilized. The attachment doesn't have downside, but it's not worth using on the Type 25.

The Hybrid Optic gives a close and long range optic that the user can switch between at his/her leisure. This attachment is best used for players who don't like to use the iron sights, but can't decide between the Reflex Sight or the ACOG Scope.

The MMS gives an extremely low zoom level optic that scans the environment, and can illuminate opponents standing still. The MMS is very limited in function, as opponents must be standing still, be at a close enough range, and not be using Cold Blooded. On top of that, the Type 25 isn't built to use the MMS well, as it only has medium penetration power. For the most part, the only benefits the MMS provides are the very low zoom level and the large viewing area in the sight.

"Type 25...you're my type alright! Fully automatic, high capacity and goes like a coal-burning freight train!"
— Marlton Johnson, when obtaining the Type 25 from the Mystery Box in Die Rise

The Type 25 appears in Zombies maps such as Green Run, Nuketown Zombies, Die Rise, and Origins and can be acquired from the Mystery Box for 950 points. Much like the Famas from Black Ops, the Type 25 suffers from low ammo capacity of only 150 rounds when obtained, long and commonplace reloads, low damage, and very high and unpredictable recoil. It can help in the accumulation of points, but overall, there are better choices such as the MTAR due to its higher reserve capacity and the Galil due to it also having a higher reserve capacity but also a higher magazine capacity. Double Tap II is not very good on the Type 25, as the already high ROF becomes next to uncontrollable, and ammunition supplies will deplete fast.

When Pack-a-Punched via the Pack-a-Punch Machine, it becomes the Strain 25. It has a 30-round magazine with 270 rounds in reserve, higher damage, and two attachments, a Reflex Sight and a Fast Mag. It is one of the weapons able to be Pack-a-Punched multiple times for 2000 points, cycling through different attachments, but retains the Fast Mag attachment. These attachments include a Grenade Launcher, EOTech Sight, Target Finder and a MMS.

The Type 25 in first person

Sprinting with the Type 25

A soldier firing his Type 25 in an early screenshot

Third-person view of the Type 25, equipped with Reflex Sight 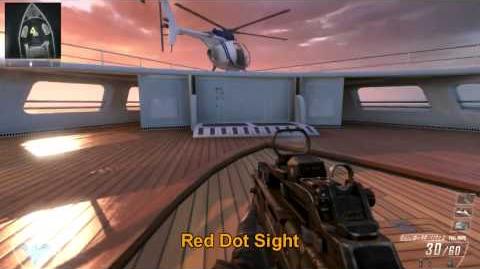 The Type 25 in Call of Duty: Strike Team

Pre-alpha assault rifles. Notice the Type 25 on the first row.

The Type 25 returns in Call of Duty: Mobile.

The gun features moderate damage, low recoil and fast fire rate. The mobility is average for assault rifles, so it is recommended that mobility attachments are equipped on this gun. This gun is the best used for supporting lanes and eliminating enemy from medium distance. With the Stopping Power Reload mag, the gun will deal more damage, though the difference is nigh-negligible.

The gun can deal high damage with very high fire rate, allowing it to kill well-armored enemies in a blink of an eye. However, it does have very bouncy recoil and poor ADS spread, which makes it hard to use at long range. The gun can be found as Common and Epic blueprints (both of which were removed recently) and customized blueprints.