This gun is the mounted machine gun of the Imperial Japanese Army. It is found mounted in "Semper Fi", "Little Resistance", "Hard Landing", "Burn 'em Out", and "Breaking Point". One pins down the player and his squad in "Blowtorch & Corkscrew" and "Burn 'em Out". It has the ability to rip soldiers apart, just as the Mounted MG42 of the Eastern Front.

The weapon can be used in its mounted form whenever the player overtakes a Japanese emplacement in which one or more was mounted. However, due to direction in which the weapons are mounted, they are rarely ever in a useful position. The only exceptions being one in the level "Breaking Point", where Roebuck tells the player to "use their own guns against them" to tear up retreating Japanese soldiers, and in Little Resistance, where Sullivan says "Get on those MG's and tear em up!" to kill Japanese mortar crews. It has a much slower rate of fire than the other mounted machine guns encountered by the player, but it makes up for this by overheating at a slower rate. This is one of the few usable weapons from the singleplayer campaign that is completely absent from multiplayer.

Using the Type 92 in Call of Duty: World at War. 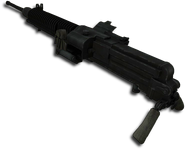 Third person view of the Type 92.

The Type 92 appears in Call of Duty: Black Ops four times; in the level "Victor Charlie" where it is used as a dual mount turret, and later in "WMD" where it is used against the Kilo 1 group from a tower after the group dives off a mountain to escape the avalanche. This can only be seen via "no-clipping." The Type 92 is also seen in the Zombie maps Kino der Toten and Ascension, where it is mounted on an automated mount, which costs 1500 points to activate.

Aiming down the turret's sights.

The dual Type 92s used by the Viet Cong just before entering the Rat Tunnels in "Victor Charlie".

The Type 92 in Kino der Toten.