"Back on US soil, meet with senior officials to discuss the threat posed by General Dragovich."
— Briefing

"We are in grave danger from the Communists. Our freedom, our very way of life is at risk. I’m told you are the very best we have... anywhere. You will need to be... Mr. Mason, take care of it."
— President John F. Kennedy to Alex Mason

"U.S.D.D." (United States Department of Defense) is the third campaign mission in Call of Duty: Black Ops. It is similar to "The Coup" of Call of Duty 4: Modern Warfare as they are both mainly cinematic levels and have presidents with pistols aimed at them. The mission takes place at the Pentagon on November 10, 1963 following Alex Mason's escape from Vorkuta.

Redirect Mason, Alex to the Pentagon.

The newly free Alex Mason has been cleared by polygraph testing and turned over to Jason Hudson of the CIA, and they are summoned to the Pentagon. In the present day, Mason's interrogators ask him why they were summoned, and Mason replies that Hudson did not tell him as they both lacked security clearance.

After the CH-47 Chinook carrying them touching down, Hudson and Mason meet US Secretary of Defense Robert McNamara in a limousine convoy, and they are brought to the Pentagon offices. Along the way, McNamara informs Mason that Dragovich poses a grave threat to national security, which Mason immediately deduces as meaning that Mason must kill him.

Mason, Hudson and McNamara walk through the Pentagon offices, clearing four checkpoints as VIPs. Mason tells his interrogators in the present that he felt like he was being watched, receiving the chilling response that the interrogators were in the Pentagon, watching him.

As Mason passes through the Pentagon nerve center, he starts to breathe heavily and again experiences background auditory and visual hallucinations of numbers from a numbers station, prompting Hudson to commiserate on how overwhelming the Pentagon is. In the present, Mason states to his interrogators that it felt as if he were in a dream, and he deliriously repeats fragments of Reznov's eight-part plan to escape from Vorkuta. The lead interrogator replies, "It was working."

After passing through the Pentagon nerve center, Mason enters a private sanctum, upon which Hudson, lacking security clearance, wishes Mason luck and leaves. McNamara introduces Mason to the figure, who turns around to reveal himself as President John F. Kennedy. Kennedy informs Mason that, as the best man the CIA has, Mason must eliminate Dragovich to protect the lives of America from danger. At the same time, Mason visually hallucinates picking up a pistol and assassinating Kennedy. 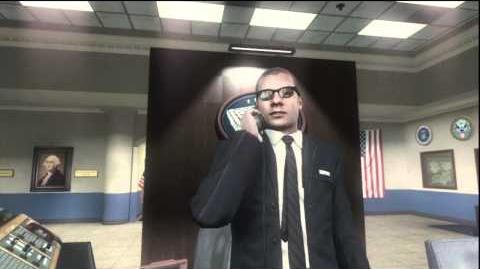 Mason walking through the Pentagon.

Hudson, Mason and Robert walking through the Pentagon.

More of the trio walking through the Pentagon.

Concept art of the nerve center.

Treyarch's logo and name on the metal detector. 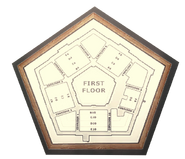 A floor plan of the first floor found behind the main desk.

An overhead view of The Pentagon.

The statuses of deployed agents.

Hudson in the nerve center of the Pentagon.

Mason aiming at Kennedy in a hallucination.

Kennedy speaking to Mason.
Add a photo to this gallery

Pictures of gameplay from Call of Duty: World at War are seen in the hallway's portraits on Zombie Mode.

A portrait of the level "Little Resistance".

A portrait of the level "Hard Landing".

A portrait of the level "Black Cats".
Add a photo to this gallery

Hudson: "It never gets old. Overwhelming isn't it?"
McNamara: "Not yet."
— Jason Hudson and Robert McNamara on the nerve center.

McNamara: "Nothing less than our national security is at stake. He has no fear. No conscience. No weakness. This is Nikita Dragovich. I believe you two have already met."
Mason: "When do I kill him?"
McNamara: "We’re lucky to have you back, Mason."
— Robert McNamara and Alex Mason discussing in the limo.

Retrieved from "https://callofduty.fandom.com/wiki/U.S.D.D.?oldid=2559894"
Community content is available under CC-BY-SA unless otherwise noted.