Start a Wiki
[Edit this tab]

U.S. Army Rangers appear Call of Duty: Black Ops II. They appear first in the 1989 US invasion of Panama. They are seen fighting in the streets against PDF in "Suffer With Me". When Manuel Noriega escapes from Mason and Woods, he confronts two Rangers, and kills one, before throwing the other down the building. Once Woods and Mason confront and punish him, Rangers that found the one wounded Ranger call in a gunship strike, which Woods, Mason, and Noriega have to escape. In 2025, large numbers of futuristic Army Rangers are seen assisting Commander David Mason in assaulting Cordis Die's base in Haiti during the final mission "Judgement Day". 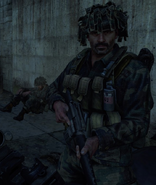 Rangers on an improvised checkpoint in Panama, giving shelter to civilians affected by the invasion. 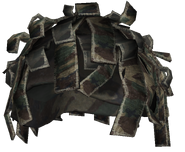 Add a photo to this gallery
Retrieved from "https://callofduty.fandom.com/wiki/U.S._Army_Rangers/Black_Ops?oldid=2199443"
Community content is available under CC-BY-SA unless otherwise noted.