Sua Sponte ("Of Their Own Accord")

The US Army Rangers are one of six multiplayer factions. They are also one of two playable factions in the game's campaign. They fought in Afghanistan until they were transferred back to the United States to stop a Russian invasion. The Rangers' campaign is lived first through the eyes of Joseph Allen (for the levels "S.S.D.D." and "Team Player") and then James Ramirez for the rest of the US missions. Both are members of 1st Battalion, 75th Ranger Regiment, and are squad-mates with key characters Sgt. Foley and Cpl. Dunn.

The Rangers were under the command of General Shepherd. The Rangers wear Army Combat Uniforms (in Universal Camouflage Pattern) and plate carriers colored in "Ranger Green."

The Rangers appear in the Call of Duty: Modern Warfare 3 mission "Black Tuesday" alongside Delta Force. They are seen briefly in the beginning of the mission. Rangers are assigned as a Q.R.F. (Quick Reaction Force) for Team Metal in the mission "Bag and Drag". They play a larger role in the mission "Goalpost" where they help Delta Force assault Hamburg to recapture the vice president, are seen in "Scorched Earth", supporting Team Metal with three Leopard 2 tanks and can be played as in the Special Ops missions, Negotiator and Special Delivery.

Convoy of Rangers in Afghanistan.

A Ranger in Washington.

A Ranger signaling his presence with a flare in Washington. 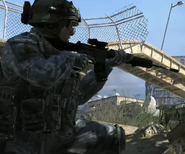 A Ranger in "Team Player".

A Ranger in "Whiskey Hotel". 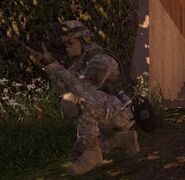 Ranger with a MP5K.

Ranger with an AT4.

Ranger with a Riot Shield. 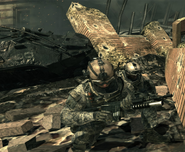