Call of Duty Wiki
Register
Don't have an account?
Sign In
Advertisement
in: Call of Duty: Modern Warfare 2 Locations

"Price, I am approaching at the boneyard. I see you do not have situation under control. Very unsafe to land. It looks like when I was in Afghanistan with the Soviets."
— Nikolai to John Price. 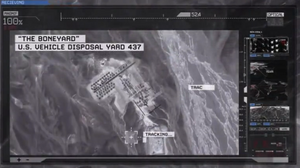 The U.S. Vehicle Disposal Yard 437 was a "vehicle graveyard" in Afghanistan that the United States Army used to dispose of military vehicles and aircraft. Among them are M1A2 Abrams, UH-60 Blackhawks, AV-8B Harrier IIs, Mi-24 Hinds, F-15 Eagles, passenger planes, and jeeps.

When Task Force 141 needed to search for Vladimir Makarov, they narrowed his location to two spots: the boneyard in Afghanistan; or the estate in the Caucasus Mountains. John "Soap" MacTavish and John Price searched at the boneyard, while the others searched in the Caucasus Mountains. However, after the team in the boneyard was attacked by Shadow Company, Soap and Price contacted their Russian informant, Nikolai, to rescue them. Soap, Captain Price, and Rook fought their way through the wreckage as Makarov's elite mercenaries and Shepherd's Shadow Company battled and gained intel from Vladimir Makarov before escaping on Nikolai's C-130 Hercules, minus Rook who is killed while driving the jeep.

Blackhawk
Community content is available under CC-BY-SA unless otherwise noted.