"Full-auto ballistic pistol built from modular pieces. This configuration has a slow fire rate but high damage that is effective at longer ranges."
— In-game description

The UDM (known in pre-release as the Maverick[1], and as the UDM45 in the game files) is a fully-automatic bullpup handgun featured in Call of Duty: Infinite Warfare. It is available via a challenge or by a Supply Drop, while its variants can only be obtained via Supply Drops. The weapon was added to the game on February 28th, 2017.[2]

The UDM is an advanced modular full-auto Machine Pistol, unlocked via a challenge that requires the player to get 200 kills with a pistol using an optic and a non-supply drop weapon accessory. It is versatile and strong overall, allowing it to be very competitive when compared to the other pistols, and can even be compared to Submachine Guns in terms of effectiveness.

The UDM has many positivities, such as being ammo efficient (courtesy of a lower fire rate), decent damage, above average range for a pistol, controllable recoil, and an integrated optic. These allow the weapon to be an excellent performer at mid range, which means that players using this weapon as a backup will have a lower need of requiring a mid range weapon, such as an assault rifle.

The UDM was added to the Magic Wheel on Zombies in Spaceland and Rave in the Redwoods, alongside the R-VN. However, the player cannot customize the weapon until the player has obtained it once from the Magic Wheel. In Shaolin Shuffle and Attack of the Radioactive Thing, it appears on the wall for 750 points.

The Stalker variant of the UDM turns the pistol into a semi-automatic sniper pistol, significantly increasing its damage and range as well as adding an in-built and unique scope, however this is traded off by its reduced rate of fire. Pistol attachments remain those available for this variant except for the the Akimbo attachment, which is not selectable.

In Zombies mode, the UDM is an extremely powerful weapon especially in early waves, being a one hit to the chest up to the end of wave 12. It continues to take one hit to kill when shooting the head until the late teen waves. However, without the Hollow Point attachment making headshots does not significantly reduce shots to kill into the 20s waves compared to the chest.

"Semi-auto ballistic pistol built from modular pieces. This configuration is equipped with a sniper scope and outputs sniper-class damage in a lightweight package."
— Description of the UDM - Stalker 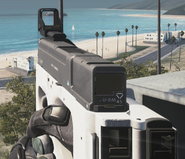 The UDM in first person 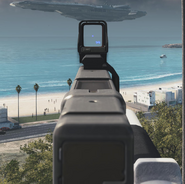 Aiming down the scope of the Stalker variant