"We've got one good UMP. They've got a thousand."
— John "Soap" MacTavish

The UMP45 is immediately available from the start of the game in the First Recon class, and is available for Create-A-Class from level 4 onwards.

With user friendly iron sights, optics on this weapon are of questionable use. Many players will find more use in other attachments. As well, recoil is very small, making the UMP45 a favorite amongst players due to extreme accuracy.

The UMP45 has an extremely small damage drop-off: there is only a five damage difference between the maximum and minimum damage, and both damage profiles allow for three-hit kills; however, to counterbalance the high damage, the UMP45 has the lowest rate of fire of all Submachine Guns. However, Stopping Power has the ability to grant the UMP45 a two-shot kill at close range, making it have the shortest time-to-kill after the MP5K. As well, Rapid Fire can speed up the time-to-kill dramatically, combining Rapid Fire with Stopping Power makes its time-to-kill amongst the fastest of all weapons in Call Of Duty; however, the UMP45 with Rapid Fire becomes significantly less accurate than a UMP45 sans attachment, but remains somewhat controllable.

The UMP45's biggest strengths are its high damage output alongside great accuracy and ammunition control. This makes the UMP a very deadly weapon, and is amongst the most used weapons online in Modern Warfare 2.

The UMP45 is flexible with several attachments and loadouts. Using a Silencer has minimal effect on the UMP45, and combining it with Cold Blooded makes the user a very deadly stealth soldier. Akimbo can resolve the UMP45's close range problem and dramatically decrease close quarters time-to-kill, but the strength of accuracy is lost altogether. Rapid Fire, as aforementioned, also decreases the time-to-kill very nicely.

The UMP45 is also the only SMG to consistently one-hit-kill in Hardcore (except if the enemy is using Last Stand, Final Stand or Painkiller, or when firing through cover), which makes it a great gun to take on groups of enemies.

In conclusion, the UMP45 is a powerful weapon that should never be underestimated. Its fast time-to-kill, surpassing even some Assault Rifles, and extreme accuracy, surpassing almost every SMG, make the UMP45 a valuable weapon in almost every experienced player's hands. Many players can cause havoc on the battlefield with this weapon alone, as its extreme power and accuracy make it easy to play to the weapon's strengths using attachments and strategies.

The UMP45 in first-person.

The UMP45 in third-person.

An Ultranationalist fires his UMP45 while riding on the back of a Snowmobile.

A Shadow Company soldier aims his UMP45 while riding in a Zodiac.
Add a photo to this gallery

The UMP45 is used by John "Soap" MacTavish and by several Shadow Company soldiers.

The UMP45 before being picked up by Soap.
Add a photo to this gallery

The UMP45 returns in Call of Duty: Modern Warfare 3. It was first shown in the reveal trailer for the game, as a soldier was blind firing it.

The UMP45 appears in Call of Duty: Modern Warfare 3's campaign. It is used by Ultranationalists in the level "Mind the Gap” and "Stronghold" while the Yuri and Price are clearing the prison cells of enemies and after it goes loud. In the latter is in the large room where the shootout is with an office on the far right side. It is in that office. The UMP45 is usable and can be picked up by the player. It uses the same model as in Call of Duty: Modern Warfare 2. It also features Modern Warfare 2's ACOG Scope. This is the only time the UMP45 is usable in campaign.

The UMP45 appears in Call of Duty: Modern Warfare 3's multiplayer. It is available in one of the five default classes (First Recon). It features a 32-round magazine, moderate recoil and clear iron sights. The UMP45 has much lower damage at range than its Call of Duty: Modern Warfare 2 counterpart, killing in six shots (before a recent patch) outside effective range. It does, however, have a faster rate of fire, lower recoil, higher maximum damage making it a two-shot kill at close-range if one of those shots is a headshot and features the higher penetration of assault rifles, making it ideal for close-quarters combat and room clearing. The UMP45 also has the highest range of all the SMGs so it's quite effective at medium ranges too. Rapid Fire is a popular and effective attachment online, especially in conjunction with a Silencer, particularly in Search and Destroy where the limited amount of enemy players makes up for the rapid ammunition consumption. The UMP45 has the longest range in its class, making the suppressor a good choice as the range penalty has little negative consequence.

Infinity Ward has released a hotfix that buffed the UMP45's minimum damage to a five-shot kill, therefore it is now much more effective at medium range than it was prior to the update and is now on par with the MP5.

The UMP45 is available in Survival Mode at level 4 and costs $2000. The UMP45 is a versatile weapon due to its high damage in close range and relatively higher mobility comparing to the assault rifles which have similar amount of damages; for example, a magazine of bullets is enough to take out a Juggernaut much like the CM901. The gun also has relatively clear iron sights, which means an optic attachment is not necessary. Moreover, the slower rate of fire compared to other submachine guns reduces the problem of recoil, which makes the gun more controllable. In short, this gun is an ideal weapon for close quarter combats maps. The UMP45 is a fairly effective weapon against Little Birds.

First Person view of the UMP45. 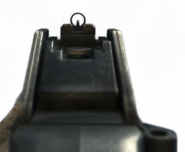 Aiming down the sights of the UMP45. 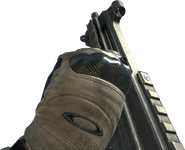 The Modern Warfare 2 UMP45 with an ACOG Scope from the mission "Stronghold".

A Delta Force operator armed with an UMP45.

UMP45 equipped with silencer in third person.
Add a photo to this gallery

The UMP45 returns in Call of Duty Online as the UMG.

The UMG in first person with a foregrip and extended mags

Third person view with a suppressor.
Add a photo to this gallery

The UMP45 as it appears in Call of Duty: Ghosts.
Add a photo to this gallery

Purchase with a Classic Weapon Token

The UMP45 returns in Call of Duty: Infinite Warfare as the MacTav-45, named after John "Soap" MacTavish. It has a foregrip by default like the M4A1 from the Modern Warfare series.

The MacTav-45 is unlocked by using a Classic Weapon Token to purchase the weapon after entering Prestige Mode. It has extremely long range, outclassing many Assault Rifles, at longer than 40 meters. This reliable stopping power is excellent compared to other SMGs, all of which drop down to five-to-six shot kills at the range where the MacTav-45 remains effective. To balance this extreme range, the MacTav-45 has the slowest rate of fire of all SMGs, being somewhat inferior to other weapons in the class, as they have much higher rates of fire and usually higher damage at close range. This weapon is further hampered by its slightly less than appropriate recoil, making use of the MacTav-45 at range without the assistance of the VMC sight's recoil reduction abilities difficult, unless other measures are taken to reduce overall recoil, such as tap firing.

On February 3rd, 2017, the MacTav-45 was updated to increase recoil when firing while aiming down the sights[1].

The MacTav-45 is available from the Magic Wheel and off the wall in Attack of The Radioactive Thing for $1000. When Pack-a-Punched it becomes the 45 R.P.M. When Double Packed it becomes the Crispy Arrow.

The MacTav-45 in first person

Aiming down the sights
Add a photo to this gallery

Retrieved from "https://callofduty.fandom.com/wiki/UMP45?oldid=2517145"
Community content is available under CC-BY-SA unless otherwise noted.