Call of Duty Wiki
Register
Don't have an account?
Sign In
Advertisement
in: Call of Duty: Black Ops II Factions

"Death to the MPLA!"
— Jonas Savimbi

The National Union for the Total Independence of Angola (Portuguese: União Nacional para a Independência Total de Angola), or UNITA for short, is a faction that appears in Call of Duty: Black Ops II. They fought with Alex Mason in 1986 against an MPLA expeditionary force during the Angolan Civil War..

In 1986, Alex Mason infiltrated Angola along with Jason Hudson to rescue Frank Woods, then held captive by Raul Menendez, who was funneling arms into the ongoing conflict. UNITA forces tracked Woods down for the two Americans, but not before being forced to repulse an attack on Jamba by an MPLA battalion. Their ensuing defeat owed much to Hudson, who carried out air strikes on enemy T-62s from a K-Car gunship.

Savimbi later rescued Alex, Woods, and Hudson from the Cubango River, via an Mi-24 Hind.

As mentioned by the title of Buried, Resolution 1295, a UN resolution, UNITA had sanctions put against it by the United Nations. 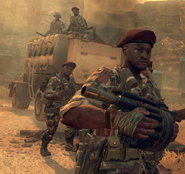