The USP .45 is a common starting sidearm and the only sidearm available with a suppressor in the campaign. The unsuppressed USP .45 appears in "F.N.G.", "Crew Expendable", and "Charlie Don't Surf". The suppressed USP .45 appears in "All Ghillied Up", "One Shot, One Kill", "Ultimatum", "All In", "No Fighting In The War Room", and "Mile High Club". As with most sidearms, the player may choose to swap the USP .45 out with a more powerful weapon. It comes with laser aiming module mounted under the barrel which is purely aesthetic. In Modern Warfare Remastered, "Crew Expendable" features a suppressed USP.45 unlike the the original version that happens to be unsuppressed.

The USP .45 is an able side arm in multiplayer because of its range, high magazine capacity and early unlock level. It kills in 3-5 shots depending on range; Stopping Power reduces this to 2-4 shots. This puts it on par with the M9 and the M1911 .45 in terms of damage, though the three pistols all have unique characteristics that set each other apart. It has four more rounds than the M1911 .45, as well as greater range, slightly greater recoil, and poorer hipfire accuracy. Compared to the M9, the USP .45 has three fewer bullets in the magazine, and much poorer hipfire, but much better range. It also shares the ammunition pool with the M1911 .45. Due to its range, it is the second most powerful pistol at medium range behind the Desert Eagle. Its major flaw, however, is its mediocre hipfire accuracy compared to that of other pistols, particularly while moving. This makes the USP .45 a less reactive pistol than others, as aiming down sight is so important. The USP .45 also has the slowest ADS speed at 200 milliseconds (in contrast to the M1911's 150 milliseconds and M9's 100 milliseconds), further enforcing its characteristic of being a slower, more deliberate pistol.

The USP .45 benefits the most out of the pistols that can be suppressed due to its superior range not being influenced much by the addition of a suppressor.

The USP .45 is available in the Heavy Gunner default class, and with a Silencer in the Spec Ops default class.

In Modern Warfare: Remastered, the USP .45 with the suppressor appears as the 11th weapon in Gun Game.

The USP .45 appears in Old School Mode with 24 rounds in the magazine and 12 rounds of reserve ammunition.

Pulling back on the USP .45's pistol slide.

The unsilenced USP .45 can be used by PFC Joseph Allen in the mission "S.S.D.D." and by Sgt Gary "Roach" Sanderson in "The Gulag". Its silenced variant is seen in the missions "Cliffhanger", used by Roach, and in "Contingency" (also in Roach's hands). Enemies are also seen using an unsilenced version, notably in the mission "The Only Easy Day... Was Yesterday" when they attempt to kill hostages. Like its COD4 counterpart, it comes with a non-removable, non-functional laser-aiming module under the barrel.

The USP .45 appears in two variants, much like its campaign counterpart. It can be seen with a Tactical Knife in "The Pit" and "Terminal". As with the campaign mission "The Only Easy Day...Was Yesterday", enemies in "Wetwork" will also use one when executing civilians.

The silenced version of this weapon is featured in "Evasion", "Hidden" and "Acceptable Losses", equipped with a Tactical Knife and suppressor. Enemies use it in the second level, most notably ghillie snipers if one gets too close.

The USP .45 is unlocked as soon as Create-a-Class is unlocked and largely retains its low hip-fire accuracy and recoil while maintaining longer range than the M9. It kills in three to four hits without Stopping Power, and two to three with it. As with the other pistols, the USP.45 has some of the fastest weapon draw and reloading speeds in Modern Warfare 2, but no zoom when aiming down sight and poor range.

FMJ does not work well with the USP .45 due to its low starting penetration and semi-automatic firing. However, other attachments are just as useful as they would be on other weapons. The USP .45 is also the only handgun to support a fully functional silencer, due to a glitch with the M9 silencer attachment that will still make the player show up on the map when fired, while the Magnum and Desert Eagle do not have a suppressor available. The Tactical Knife attachment speeds up melee speed, but also adds more visual recoil to the gun and slightly misaligns the iron sights. Akimbo is useful with USP.45s due to good hipfire accuracy and high close range damage. Akimbo USP .45s have a much faster knifing animation than other weapons, even other pistols equipped with the Tactical Knife attachment. Extended Mags allows the USP.45 to compete with the M9 for capacity.

The USP appears in Call of Duty: Modern Warfare: Mobilized as one of the two sidearms available in-game; the other being the M9. Unlike on the consoles, the USP has a 15 round magazine, as opposed to 12 rounds (strangely, the gun doesn't appear to have an extended mag). In addition, a laser aiming module is attached underneath the guns barrel, but it can't be turned on/off. It's recoil also settles much faster, resulting in more accurate shots. In singleplayer it is also incapable of a one-shot kill at close range if not headshot, but can kill in 2-3 shots at any range. Aside from this the USP is mostly the same as the console versions. However, the weapon's benefits are short-lived, since the USP is only available in one singleplayer level, "Needle in a Haystack".

In multiplayer, the USP is the default sidearm for the Coalition faction, it is the same as the M9, but due to the clearer iron sight and less usage in campaign, it is much more used than the M9. However, the iron sights are misaligned, as the real point of impact lands on top of the right dot, and its power is decreased, taking 3-4 shots to kill, depending on range. On top of this, the USP has terrible hipfire accuracy when moving, being almost as inaccurate as an LMG from the hip; but when stationary, it has much better hipfire accuracy; perfect when crouching

The USP viewed from third-person.

The USP in first person.

The USP. 45 returns in Call of Duty: Modern Warfare 3 with a changed appearance; it now has an underbarrel flashlight and a shinier, darker finish. However, the MW2 model still exists and can be found in Campaign and Spec Ops.

The USP .45 first appears in the level "Hunter Killer" where it is the starting secondary weapon and comes without attachments. It is used by Marcus Burns in "Mind the Gap" with both a silencer and a tactical knife. Also, Derek "Frost" Westbrook uses a special Modern Warfare 2 variant of the USP .45 as a sidearm in "Bag and Drag" as well as "Iron Lady" (as the standard variant). Yuri uses this weapon in "Eye of the Storm", and in "Dust to Dust" when he makes a desperate attempt to stop Makarov from killing Captain Price. The helicopter pilot in said mission also equips a USP .45 to try and kill Price but never uses it as he is stabbed afterwards.

The USP .45 is unlocked by default to the player. It features the fastest reload of any handgun but is otherwise quite ordinary. Compared to the other low-damage handguns (The P99 and the Five Seven), the USP .45 has the lowest fire-cap and a greater amount of visual recoil (with the pistol bouncing up more than the other two). It does have an interesting range profile, the bullets dropping off from a three-hit kill slightly sooner than the other two, but maintaining their damage for longer. This makes the weapon less effective at somewhat close-range but more effective as it approaches medium-range. As with the P99, the use of a silencer will block out the iron sights, hindering long-range targeting.

The USP .45 is available for both Survival and Mission modes.

The USP .45 is a starting weapon in the Mission Mode challenges "Stay Sharp", "Hit and Run", "Hostage Taker", "Resistance Movement", and "Charges Set".

The USP .45 is the starting weapon for Tier 2 (Regular) Survival Mode missions. It is also available from the Weapon Armory for $250 and takes three to four shots to kill from waves 1 to 15. Downed enemies use the USP .45 as their backup weapon on the maps the player equips it as the starting weapon

Attaching a silencer on the USP .45 in "Hostage Taker".

The USP .45 with Silencer and Tactical Knife attachment in "Mind the Gap".

A Juggernaut Recon with the USP .45. 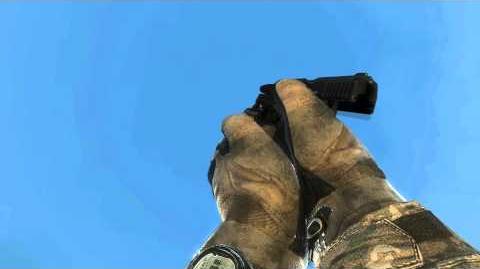 USP.45 when aiming down sights.

The USP .45 can be seen holstered by Mercs. It is not usable during gameplay, and when they draw their handgun, they use a Five-seven. 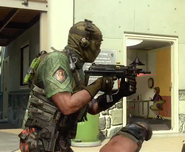 A Merc with a holstered USP .45

The USP .45 returns in Call of Duty Online as the USPT.45, and unlike most iterations, the weapon model has no underbarrel attachment by default. 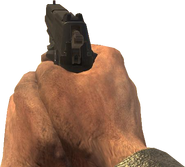 The USPT.45 in first person

Aiming down the USPT.45's iron sights

The USP .45 is found in the game files and is loaded into the memory of several missions. It was most likely used for developer testing, since it uses the model of the Call of Duty: Modern Warfare 2 and the silencer model from Call of Duty 4: Modern Warfare is permanently attached.