Call of Duty Wiki
Register
Don't have an account?
Sign In
Advertisement
in: Call of Duty: Ghosts Sniper Rifles

For another variant, see R700.
For a similarly named sniper rifle, see MSR.

"Bolt-action. Deadly from waist up with faster handling. Recoil Compensator reduces kick with each kill."
— Description.

The USR is a sniper rifle that appears in Call of Duty: Ghosts.

The USR is absent from the campaign, but appears in multiplayer. It costs 6 Squad Points to unlock, making it the cheapest purchasable sniper. It features a built-in Recoil Compensator which will decrease the weapon's kick with each kill, making it very popular amongst experienced players. While this does not make follow up shots easier to place (since the bolt-action nature of the USR allows the sights to reset after each shot), it will reduce the scope's visual kick at a higher number of kills, which makes keeping track of targets easier.

This weapon behaves similarly to the Ballista from Black Ops II and the MSR from Modern Warfare 3 in that it has increased movement speed, a relatively fast aim down sight time, and a higher rate of fire. It has the highest movement speed of any sniper rifle in Ghosts at 90%, the highest ADS movement speed in its class, a higher rate of fire than the L115 (the other bolt action rifle in Ghosts), the lowest idle sway in its class, and is faster than the any sniper rifle for fastest ADS time. The downside to all this is that it has a smaller default one shot kill area. Whereas the L115 has multipliers that allow one shot kills to the upper legs with no attachment modifications, the USR does not. However, the USR and L115 have the same one shot kill area when both are using Chrome Lined, meaning that this attachment is highly recommended.

It makes an appearance in Safeguard, with Variable Zoom Lens and Extended Mags added to it. It is obtainable from Supply Drops. Overall, it is recommended the player keep even the MP-443 Grach over it because it has a slow rate of fire, and it takes two shots to kill an enemy even on the first few rounds. It can be sometimes be good for larger maps, such as Stonehaven. Its even more useful if the player plans to fire on enemies far away.

The USR is available in the map Awakening for $1500. It is located in the second area, near the second barrier and Vanguard station. It comes with a Variable Zoom Lens by default and 8 round magazines, much like the L115. The USR can only equip Extended Mags and/or an ARK.

The USR is essentially the spiritual successor to the L115, as both have the power to kill medium targets in a single shot under perfect circumstances, both benefit from Sniper Deadeye, and both retain their damage over long ranges. The USR, being bolt-action, has some of the worst damage output out of all guns found on Awakening, and being a sniper rifle, its handling is poor. The USR is best utilized by Weapon Specialists who can alleviate the USR's handling woes and bolster its per-shot power. Even in the hands of weapon specialists, the USR's damage output is so pitiful that it should not be used unless it is necessary to do so.

Like with the VKS and L115, interacting with Search Piles when holding the USR will give a completely random pool of attachments. If searching with the USR, it is very common to find a slew of attachments that are completely unusable on the USR. This makes the USR a bad weapon to search with, as it will often lead to the player being given many undesirable, unusable attachments.

Strangely, the USR can be used for the purpose of completing semi-automatic rifle challenges even though it is bolt-action.

The model of the USR 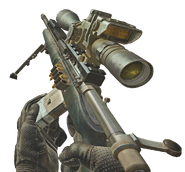 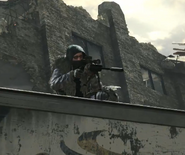 The weapon being wielded by a sniper 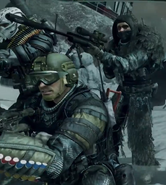