Call of Duty Wiki
Register
Don't have an account?
Sign In
Advertisement
in: Call of Duty: Black Ops II Ships

The USS Barack Obama (CVN-08), frequently referred to simply as "The Obama", is an aircraft carrier of unknown class operating within the U.S. Navy, featured in Call of Duty: Black Ops II. It is the home base for Lieutenant Commander David "Section" Mason and the rest of his SEAL team.

It is named after the 44th President of the United States, Barack Obama.

It prominently appears in the mission Odysseus, and, depending on the player's actions, the ship may be destroyed or saved.

Attack on the U.S.S. Barack Obama

Menendez is being interrogated by Mason. As the interrogation continues, Admiral Briggs reports that enemy drones are attacking the Obama. Menendez is freed by Salazar (unbeknownst to David), who then knocks out Mason and Salazar and then escapes.

After engaging a number of Mercs, Mason makes his way into the security room. Believing that there is only one option left, Admiral Briggs reboots the system, which unfortunately shuts down the security, allowing Menendez to break through. Menendez goes into the server room, alongside DeFalco (provided he survived in Karma), and holds Briggs hostage. As he walks into the control room, threatening the soldiers that he will kill Briggs if his demands are not followed. As Briggs tells the soldiers and Salazar to shoot Menendez, Salazar then betrays them by killing the two soldiers.

Menendez is given the chance to either wound Briggs by shooting him in the arm or leg, or executing him via head-shot.

Menendez then hacks the U.S. military satellite network that controls the entire drone fleet. After Mason breaks in through a ventilation shaft, he will tend to the casualties and see what Menendez has done. Mason also alerts the ship's crew that Salazar is a traitor. After Mason catches up to nearby SEALs, who have detained Salazar in a hanger bay, he will interrogate Salazar.

As Mason reaches the upper deck of the Obama, he runs into more enemy Mercs. Eventually, Mason gets into one of their VTOL transports, where Crosby is waiting. As they take off, Crosby is shot in the arm by a Merc soldier, who is killed by Mason. 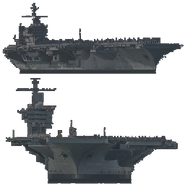 Drones over a damaged but intact Obama.

The Obama is saved by the Chinese fighters.