Call of Duty Wiki
Register
Don't have an account?
Sign In
Advertisement
in: Call of Duty: WWII Nazi Zombies Utilities

"Newly unlocked, the machine sits ready to receive weapons. It seems to upgrade weapons with power and unique traits. Upgraded weapons can also have their ammo restocked here or at their corresponding Weapon Locker."
— Notebook Information

The Ubersprengen is a utility featured in Call of Duty: WWII Nazi Zombies, found in The Final Reich, The Darkest Shore, The Shadowed Throne, The Tortured Path, Bodega Cervantes, U.S.S. Mount Olympus, Altar of Blood, and The Frozen Dawn, as well as in a small easter egg within Gröesten Haus. It is essentially the Pack-a-Punch Machine from previous Zombies installments. Unlike its predecessor however, the Ubersprengen can resupply ammo to any non-wonder weapons, including weapons that aren't normally found from Weapon Lockers, such as Mystery Box weapons. This can be done for 4,000 Jolts once the weapon the player wishes to restock is upgraded.

The Ubersprengen is located in the heart of the sewers. It can be found encased by a bone-like cage. Directly in front of the MP-40 weapon locker, there is a red button the player must press. Pressing it will cause the cage to slightly rise and open the three Disposal Tubes around the map.

The player must now use all three Disposal Tubes around the map. Doing so will bring the player into a cage in the sewer, which will immediately rise and turn on a button in the cage. Pressing the button will cause the cage to rise even more. Doing this until all three button are pressed will unlock the Ubersprengen for the rest of the game.

Occasionally, when the player presses a button in a cage, sometimes the button won't work immediately, triggering an event which causes the whole room to be engulfed by a red fog, with several Pests spawning in. The player must eliminate the Pests before the part of the cage will rise up automatically.

The player must now ride the minecart between each of the three stops (U-Boat Pens to the Beach, the Beach to Bunker 1, and Bunker 1 to the U-Boat Pens). Along each of the three paths are three different Elektroschnalle, all of which are located in the main junction that connects the three places. When the player passes by an Elektroschnalle, it will give a brief prompt to pick it up. Upon picking it up, the player's character will say an audio quote. Once the player has obtained all three Elektroschnalle from the mine, the player can install them in the panel by Bunker 3, which will raise the lift and reveal the Ubersprengen, which can then be used by the player. Upon doing this for the first time, the player will be rewarded the Going Up... achievement/trophy.

The Uberspregen is located in a broken elevator within the Destroyed Building. To first gain access to it, the player must open two fuse boxes around the map with the use of explosives, the first being on a wall to the left of the elevator and the other being in the Underbelly, on the left wall of the caged off tunnel. After opening them both, the player must use the Wunderbuss to zap both of them until a part of the Ubersprengen is revealed. Once both fuse boxes are zapped for a little bit, the Ubersprengen will be fully unlocked. Upon doing this for the first time, the player will be rewarded the Das ist gut achievement/trophy.

An Ubersprengen is located on each of the three chapters of The Tortured Path; the first is located in the windmill in "Into the Storm", the second is located in the Barracks next to the Medical Bay in "Across the Depths", and the third is located on the right side of the map near the Waffenbox for Submachine Guns. To unlock the Ubersprengen on each of the three maps, the player will kill zombies near special Ubersprengen devices around the map. However, they will only unlock after certain points, with the first device being available on Wave 1, the second becoming available starting on Wave 4, and the final being available starting on Wave 7. Once all three devices are filled, the Ubersprengen will be unlocked.

Each of the Ubersprengens located on each survival map are located in the exact same locations as they are in The Tortured Path. However, the devices will activate on different waves instead, the waves being Waves 1, 5, and 10. There is also a small easter egg on each of the survival maps that reward the player with a red battery, which inserts itself into the Ubersprengen. This allows players to upgrade the Tesla Gun, Ripsaw and melee weapons immediately.

The Ubersprengen upgrading a BAR.

The fuse panel for the Ubersprengen in The Darkest Shore.

The Going Up... achievement/trophy icon displaying the Ubersprengen. 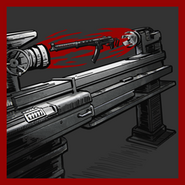