"Ulrich Vogel, director of Projekt Endstation. 12th of March, 1944. Five days have passed since the accident, and I am starting to see it not as a setback, but a breakthrough. Literally."
— Vogel describing the breach through the Dark Aether.[1]

Doctor Ulrich Vogel is a character featured in Call of Duty: Black Ops Cold War Zombies. Introduced in the map Die Maschine, Vogel is the director of the Projekt Endstation facility and was responsible for leading the project that opened a breach between the Dark Aether and the Earth.

He also makes a brief appearance in Call of Duty: Vanguard Zombies, where he is photographed alongside Oskar Strauss in Der Anfang and mentioned by Wolfram Von List in Shi No Numa.

Not much is known about Vogel's early life, only that he was married to a woman named Maria, with whom he fathered a child named Angelika Hannabelle Vogel. Unfortunately for Vogel, Maria died due to complications with childbirth. At some point, he began working under the Uranveiren during the reign of the NSDAP.

Projekt Endstation and The Cyclotron

In the summer of 1943, Kurt Diebner, the head of the Uranveiren, approved the creation of a particle accelerator named the "Cyclotron" created by Vogel and Dr. Lukas Kurtz. This resulted in the formation of Projekt Endstation, which itself was funded and led by Vogel. Projekt Endstation would set up shop in Morasko in Nazi-occupied Poland.

On March 7th, 1944, at 10:03 pm, Vogel and Kurtz performed the twelfth test of the Cyclotron. During the process, the particle accelerator malfunctioned and opened a localized rift between their world and the Dark Aether. Creatures started coming through the gateway and men close to the collider began to necrotize and turn into zombies. The small outbreak was contained but the Cyclotron was now operating on its own without external source of power.

In the course of the next few days, Vogel studied the fallen soldiers to find a way to reverse their condition. The discovery and study of the rift was also seen with great interest by Adolf Hitler and the German High Command. On March 16th, they were able to isolate an exotic and unknown element they classified as "Exo-Element 1" (which would later be dubbed Aetherium). Vogel started working on a decontamination chamber designed to reverse the condition of the fallen soldiers and restore their brain activity. He believed that if they could control the process of necrotization, they could weaponize it and create an army of undead soldiers to save the Reich. He would also, around this time, create an experimental wonder weapon known as the Wunderwaffe DG-2 for Kampfgruppe Die Wahrheit at the request of their leader, Wolfram Von List using calculations from Dr. Oskar Strauss.

With the loss of Normandy, Hitler turned once again his attention towards Endstation and, by August 1944, tasked Vogel to weaponize all their findings. Vogel continued to work on his idea of an army of soldiers who could rise up after being killed. Another wonder weapon was also created from an Exo-Element 1 collector, the Decompressive Isotopic Estrangement Machine.

At some point in late 1944, a new Endstation facility was established beneath Berlin including a tunnel made to open and sustain a rift to the Dark Aether. On November 15th, Kurtz developed lures and an Exo-Element 1 harvester which could only collect essence from Tempests. The next day, Vogel developed a conversion machine using specimens rich in Exo-Element 1 which would allow them to open a portal to the Dark Aether.

"Departure without further incident. All values stable. Arrival in Germania. As discussed, whatever happens now, victory is certain for us."
— Vogel

As the war neared it's end, so too was the defeat of the Axis all but certain. Seeing the imminent defeat of the Reich, Vogel proposed a contingency plan to send an army into the Dark Aether, only to be brought back at a later time. On December 14th, 1944, the plan was approved and dubbed "Operation: Baldr" - after the Norse god who rose from the dead. A month passed before Task Force Baldr arrived to Morasko under the command of Gruppenführer Müller.

Vogel sent instructions to Berlin on how to open a portal to the Dark Aether, and on January 27th, 1945, ordered all personnel to evacuate Projekt Endstation. Putting his trust into his now years-long partner at Morasko, Vogel tasked Kurtz with taking care of his daughter while he stayed behind. When Task: Force Baldr entered the Dark Aether, the crossing proved to be too much for the Cyclotron as many of its seals exploded, resulting in a further contamination of Exo-Element 1 at the facility. Vogel stayed behind, monitoring the Task Force for two days to ensure their safe arrival. Unbeknownst to Vogel, Task Force Baldr would become corrupted by the Dark Aether, becoming the pawns of much darker forces.

At some point after Task Force: Baldr's arrival into the Dark Aether, they came under the command of the ruler of the malicious realm - The Forsaken. The powerful entity managed to learn of Vogel's existence, soon appearing to Vogel's daughter under the guise of Ulrich to manipulate her into doing his bidding.

While the fate of Ulrich remains unknown, he would be remembered by Requiem and Omega Group through his work at Projekt Endstation - which helped kick off a new arm's race between the United States of America and the Soviet Union. Ultimately, his vision of a renewed Reich would never come to fruition, as both his daughter and the corrupted Task Force: Baldr would be defeated during their incursion into Berlin. A spectral reflection of him would also be seen by Requiem at Morasko during Operation Cerberus.

The Forsaken would mention him in a message to Requiem's strike team, implying to them that the real Ulrich Vogel was dead. 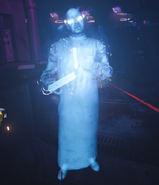 Vogel as he appears in Die Maschine's Spectral Reflections.

Picture of Vogel alongside Valentina.

Vogel with Oskar Strauss at Endstation.

Vogel's blueprint of the Wunderwaffe DG-2.