A rainy underpass around concrete grounds with minor elevation changes

Underpass is a large multiplayer map in Call of Duty: Modern Warfare 2.

Underpass takes place in the rain, underneath the destroyed remains of a highway overpass. It's a great map for various types of weapons. It has narrow corners that make for unrivaled camping spots and wide curves that can hold devastating firefights. Players must be careful moving around, as it is a perfect map for hiding claymores and staging ambushes. In spectator mode, one can see the rest of the highway, and a large bridge. Players must also be careful when using killstreaks, as the overpass can make using them difficult. 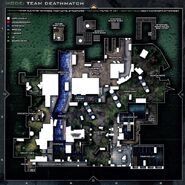