Elements of The Hunted

Unearthed is a multiplayer map in Call of Duty: Ghosts that is available in the Devastation DLC pack. It is a remake of the fan-favorite map Dome from Modern Warfare 3.

Unearthed is set in an abandoned Project Nightfall site. As its name implies, there is a Cryptid Hive that has been unearthed that replaces the large satellite dome from the original Dome.

It is a small map that has many close quarters combat situations. The two main spawn points are near the meteor, and near the entrance gate on the other side of the map. The meteor room covers only a little portion of the map, and serves no significant purpose besides possible defensive set-ups and a spot for players to snipe from. There is a catwalk around the second story of the meteor's room that overlooks most of the map. Nearby the meteor is a bunker with two entrances, and there is a bombed-out portion in the middle of the bunker. Across the bunker is a building that has a main room and a back hallway.

Another area of the map, note that one player is using the Venom-X, and there is a Nightfall Logo on one of the crates.

The circular room in the south where the meteor is held; look down in the hole and the Egg is buried in there. 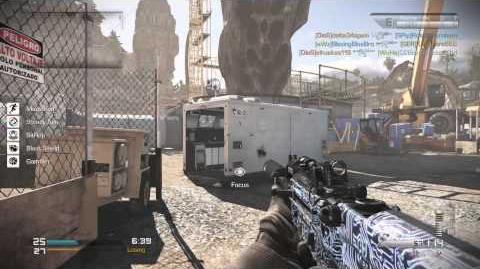