The U.S. Air Force, specifically an AC-130 from Air Force Special Operations Command, make an appearance in the missions "Hunted" and "Death From Above". The AC-130 provides cover for the escaping SAS team shot down in Russia. While its appearance in Hunted is brief, the player takes control of the TV Operator in Death From Above. Also, in the cutscene for "Ultimatum", the player's team inserts via parachute from a C-130 Hercules.

The Air Force makes several appearances throughout the campaign, though the player does not actually control any Air Force personnel. Its first appearance is in the two opening missions. AC-130 and a few MH-53 Pave Lows can be seen idling on the airfield in "S.S.D.D.". In "Team Player", the Army Rangers call in an airstrike on a large building, with the order carried out by an F-15 loaded with JDAMs.

In the mission "Exodus", hundreds of Black Hawks and Pave Lows can be seen in the sky. Although a variant of this airframe is operated by both the Navy and Army, it is most probable that these are USAF aircraft as they would have priority in such a circumstance as is exemplified in this mission. Also, a C-130 is shot down in the mission, with the player moving through the crash site.

In "The Only Easy Day... Was Yesterday" and "The Gulag", F-15's make an appearance to carry out SEAD (Suppression of Enemy Air Defense) missions in support of Task Force 141. The F-15s destroy SAM sites guarding the Gulag.

In the mission "Whiskey Hotel", Washington D.C. is assumed lost to the invading Russian forces. This enables the Hammerdown Protocol, where the USAF will carpet bomb the city unless the Army Rangers can take it back. In a harrowing moment, the player just barely makes it to the top of the White House and pops a flare, signaling the fighters to abort their mission.

The Air Force appears in the reveal trailer, showing an A-10 Thunderbolt II destroying a T-90 Russian tank at The Battle of Berlin. The USAF also appears in "Black Tuesday", as F-15 Eagle jets assault the Russian forces. They also appear in "Iron Lady" where the player controls an AC-130 Gunner again. Several other planes are seen in that level along with French Air Force planes, fighting off Russian planes.

The USAF appears in most of the campaign, as a playable faction.This faction appears first in the mission Overwatch, where the player must guide a British S.F.S.G squad.

In the missions Oil, Fire, and Ice and Running For Cover the player have to must use his binoculars to mark targets for air support.

In the missions Clearing Out and Fire From the Sky the player controls AC-130s to provide air support. 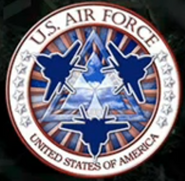 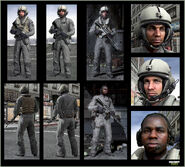 United States Air Force models.
Add a photo to this gallery
Retrieved from "https://callofduty.fandom.com/wiki/United_States_Air_Force/Modern_Warfare?oldid=2313053"
Community content is available under CC-BY-SA unless otherwise noted.