"It'll pick you up when they put you down!"
— Tagline

Up 'N Atoms is a Candy Perk in Call of Duty: Infinite Warfare Zombies mode. The perk allows the player to revive other players quicker than normal, or in Solo mode, allow a self-revive. The maximum amount of self-revives available to a player in Solo mode is 3. It is similar to Quick Revive from Treyarch's Zombies mode.

Up 'N Atoms with the blue figure down.

The top of the Up 'N Atoms box.

The bottom of the Up 'N Atoms box. Note the barcode and the ingredients list. 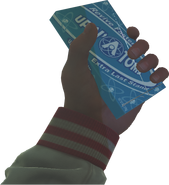