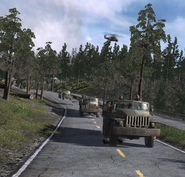 They are also used by the Russian Army in Call of Duty: Modern Warfare 2. In "Contingency", they are used to bring in reinforcements to help defend the base while Ghost, Roach and the rest of the team cover Price. In "S.S.D.D.", some can be seen outside of the accessible part of the base, even though Fire Base Phoenix is an American base and the Ural-4320 is a Russian truck. It could have been captured and driven back to the base, but this is most likely another case of model reuse to replace a nonexistent American truck. In "Wolverines!", a Ural-4320 truck parks in the rear parking lot of the NOVA Star Station to unload troops. In the Special Ops mission "Big Brother", this truck is also seen unloading troops and can be destroyed by Gunslinger-One. When the player on the ground leaves the Nova Star Station Gas parking lot, two more Ural-4320 trucks begin to travel along the main road and enter the parking lot of Nate's Restaurant, dropping off more troops. A fourth truck also appears shortly after, delivering even more troops.

At least one wrecked Ural-4320 can be seen in a pile of scrap in the Call of Duty: Modern Warfare 2 DLC map Salvage.

The Ural-4320 is seen in Call of Duty: Modern Warfare 3 being used by the Russian army and the Inner Circle. It is seen in the missions "Iron Lady", "Eye of the Storm", "Blood Brothers" and "Stronghold", dropping off enemies.