Camo on both cheeks

Any weapon obtained by the player.

"She takes what she wants and leaves only footprints."
— In-game description

Urban Tracker is a character featured in Call of Duty: Mobile and was added into the game as part of the Season 4 Disavowed Battle Pass. [2]

Urban Tracker with By Night uniform. 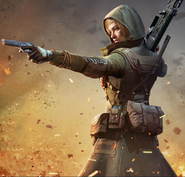 Urban Tracker with BiSH uniform. This uniform is only available on Japan. 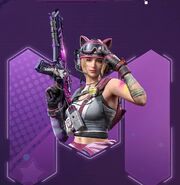