Urzikstan is a peninsula on the eastern border of the Black Sea located in the Caucasus Region, bordering the Russian Federation to the north and Georgia to the east. The capital is Sakhra where the Embassy of the United States is located. The climate is mostly arid.

While the Urzikstan Armed Forces isn't shown in the Single Player, its Special Operation Forces unit called the Urzikstan SSG appear as an Allegiance Mil-Sim skin after Season Three. In addition Farah Karim's father Walid is possibly a member of the Urzikstan military because a photo found in Hometown depicts a younger Walid armed with an AK-47.

In 1999, Russian General Roman Barkov invaded the country and ruled the country with an iron fist. Under Barkov's rule, the Urzikstani people were used as a workforce, receiving rations as payment for their work. The fate of the original government and military of Urzikstan is not stated.

Some times after the Tobrak Prison Break in 2009, many POWs led by Farah Karim founded the Urzikstan Liberation Force, a western-backed militia. Meanwhile, Omar Sulaman founded Al-Qatala instead of joining the ULF, as he was against the idea of any foreign powers presence within Urzikstan.

In November 2019, General Barkov and his forces were defeated in Georgia by a joint operation between the CIA, SAS, and the Urzik Militia. As Russia officially disowned Barkov, the occupation of Urzikstan finally came to an end. However, there were still remnants of Barkov's men left in the country after Barkov's death who had avoided capture and continued Barkov's unfinished business by either offering their services to newly reformed Al-Qatala under Khaled Al-Asad or joining up with the Ultranationalists forces led by Viktor Zakhaev.

An overhead view of the country. 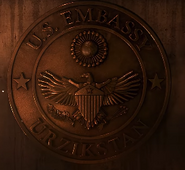 Seal of the United States Embassy in Urzikstan.