Himself via solar flare

"Commander of the Marine contingent aboard the Retribution. Hardened by years of combat, SSgt. Omar is proud of his men's ability to survive in any environment win the fight with just boots and guns. Omar's father was a settler on Titan before the SDF took it, giving Omar's fight with the SDF a personal tinge of revenge."
— Captain's Log

Staff Sergeant Usef Omar is a character featured in Call of Duty: Infinite Warfare. He leads the Marines aboard the Retribution.

While he doesn't always agree with Nick Reyes, he does have his back in a fight. Omar is all about solving problems with action, and has a personal stake in the war against the SDF, as his family suffered at their hands. He has a brash, outspoken exterior, but his mind is always on the mission and the soldiers under his command.

When he first meets E3N, he is incredibly harsh towards him, to the point of ignoring him completely, he soon softens his view towards him and eventually personally requests for E3N to join them on a mission.

Omar eventually meets his demise when he tries to save a civilian worker on the Vesta 3 asteroid station, being scorched to death by a winding solar flash.

He leaves behind his wife, Sarah, his son, Noah, and his daughter, Abby.

Usef Omar was born on Earth (presumably in the United Kingdom) and lived there until his father moved him and his family to Saturn's Moon, Titan. Omar's father was a SATO veteran who served in the 32nd Armored and survived two plane crashes during the Battle of Deimos, one of the Moons of Mars. On Titan, he recalled taking a boat ride there, and his father attempting to make a better life with his family there. However, the Settlement Defense Front invaded and forced the citizens of Titan into labor camps. Omar escaped with his family to an unknown location, but they suffered from the process, holding a personal hatred toward the SDF. While commenting during Operation: Burn Water, he jokingly admits that he tries not to hold on to the fact that his father was part of the Army while he was in the Navy.

Afterward, Omar eventually joined the Marines and reached the rank of staff sergeant during his service. During this, Usef married a woman named Sarah and had two children with her, Noah and Abby. Before the events of Infinite Warfare, Omar was in charge of a squad of Marines on the Retribution, a UNSA carrier ship ran by Captain John Alder.

Omar was present when the Settlement Defense Front attacked Geneva during Fleet Week celebrations. On board the Retribution, Captain Alder crashes into the Olympus Mons, forcing the enemy into retreat. Omar helped S.C.A.R. operatives Nick Reyes and Nora Salter enter into the deck, before telling Reyes that Alder did his duty.

After learning that Captain Alder died during the crash and his X.O., he witnesses Reyes become acting captain of the Retribution.

In Operation Burn Water, he, Reyes Ethan, Brooks and Kashima went to Titan to destroy the SDF Fueling Tower in hopes of distracting the SDF long enough so Earth can rebuild its fleet.

He was part of the team to rescue miners from Vesta 3, which was shot out of orbit towards the Sun. He was killed during exfill when he decides to help a miner get into the Raven, but unfortunately, they couldn't make it in time due to the nature of the site.

Nick Reyes was successful in his mission, with the death of Salen Kotch and the destruction of the SDF's shipyard. Omar's name was present on the board of those who had fallen, including Reyes, ETH.3n, Kashima and others. Omar left a voice message (that can he heard at the credits) to his family, telling his son that he is the man of the house now, and to not use violence unless necessary. 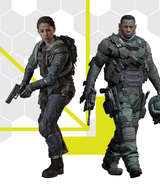 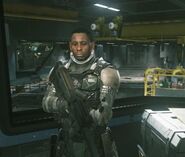 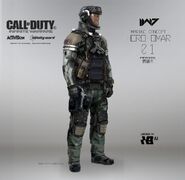