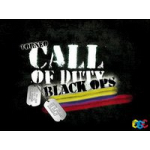 My nickname is DaNIuS:98, but my real name is Luis (I'm from Colombia).

I love CoD series since I played Call of Duty 3 in Xbox. Then I bought an Wii and there I have played CoD 4: Reflex Edition (lack graphics than PS3 and 360) and I enjoyed it; later I bought CoD: WaW (I just played his campaign mode); later I bought CoD: BO, I Didn't enjoyed his Campaign mode unlike CoD 4: Reflex, but I liked his Multy so much and his onliest map in Zombies (Kino der Toten); Right now I'm playing CoD1 in my laptop.

I'm an editor and administratorin the Spanish Call of Duty wiki. There's very low activity unlike his English homonim.

I have some mistakes when I writing.

Retrieved from "https://callofduty.fandom.com/wiki/User:DaNIuS:98?oldid=1864910"
Community content is available under CC-BY-SA unless otherwise noted.