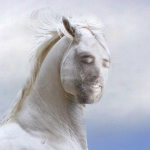 Peace, Fire, Sky. That is all.

"Voilà! In view, a humble vaudevillian veteran, cast vicariously as both victim and villain by the vicissitudes of Fate. This visage, no mere veneer of vanity, is a vestige of the vox populi, now vacant, vanished. However, this valorous visitation of a by-gone vexation, stands vivified and has vowed to vanquish these venal and virulent vermin vanguarding vice and vouchsafing the violently vicious and voracious violation of volition.

The only verdict is vengeance; a vendetta, held as a votive, not in vain, for the value and veracity of such shall one day vindicate the vigilant and the virtuous.

Verily, this vichyssoise of verbiage veers most verbose, so let me simply add that it’s my very good honor to meet you and you may call me V."

"Today, you peope are no longer maggots. Today, you are Marines. You're part of a brotherhood. From now until the day you die, wherever you are, every Marine is your brother. Most of you will go to Vietnam. Some of you will not come back. But always remember this: Marines die. That's what we're here for. But the Marine Corps lives forever. And that means YOU live forever."

I wrote this in my English Language class when our teacher assigned it to us. It was supposed to be a letter home or journal entry (what I chose) describing our experience as a soldier in World War 1. It is based on true events and is an original piece of work in its entirety. Enjoy reading.

"Today is the 21st of April, 1915. We have just arrived in Ypres, France and came upon German resistance. A great day for a birthday isn’t something that I’d say right now. Then again, I guess when I’m back home in Canada I can brag about my birthday being the day that the second battle of Ypres commenced and that I was there, up close and personal in the trenches of Ypres to witness the bloodshed with my own eyes, smell the smoke of the guns being fired, hear the whistle of the bullets flying by my face, and feel the blood splatter on my face from my fallen comrades. I could taste nothing but the dryness and vomit in my mouth from being on these fields and witnessing this massacre called “war”.

These dark days are not to end anytime soon, the Germans have dug themselves in and set up defensive lines with their Maxim guns. They usually set up one on each end of their defensive line trench to provide an impassable wall of crossfire, only providing death to those that met it. It didn’t help that the Germans were generally better armed. They were equipped with superior weaponry; automatic pistols, machine pistols, and far more accurate rifles than we were given. We were only matched in our choice of machine gun. Only the United States and France had separate machine guns, where all other countries were using the Maxim gun. In this case, the British-produced Vickers gun and German-produced MG08. However, the Germans are far more efficient in war. They’ve been practicing the advanced manoeuvers of war and producing other, extremely cruel, methods of killing with the use of chlorine gas over miles of the battlefield. I did see what looked like yellow canisters being thrown by the Germans, but I saw nothing happen. A soldier beside me said that the chlorine gas isn’t effective in the rainy weather here. Apparently water makes it useless. I guess they were upset over the realization of this, as they started to open fire on us. I didn’t realize this until I heard the horrible ‘ping’ sound of bullets hitting the helmets of my fellow soldiers. We kept our heads down until the Germans ceased fire.

However, our sighs of relief came too soon as we heard our commanding officers blow their whistles to call for a charge at the enemy. I knew that this would be a bloodbath. We charged forward and immediately I felt a sharp pain in my leg and felt something hit my head before falling unconscious.

I woke up in a field hospital, with the sickening sight of limbs and blood around me, to a surgeon, Lieutenant Colonel John McCrae, operating on my leg, cleaning the wound after removing the bullet lodged in it. He said that I was knocked out by a fellow soldier who was shot when his rifle had gone off and the recoil sent it with force towards my head. He also said my leg was fine and I’ll be left with a limp for a couple months. When I had asked him about the battle and if we had been able to de-trench the Germans, he tilted his head down with a face full of sorrow and called over a Captain Dwight Eisenhower. The captain said that casualties were estimated to be 900, while the Germans only lost 300.

While I was resting later that night, I had spotted the surgeon sitting at his desk writing something. I hopped over to him on my good leg and asked what it was. He said he was writing some poetry, something he used to do back at home to keep his mind off bad things. He said nothing else to me, remaining quiet until he suddenly got up and put in bold letters ‘In Flanders Field’ at the top of the poem, and placed an odd looking red flower on it before heading to his bunk."

I reached one thousand edits on the 29th of November, 2013. Let's get another thousand in there I'm not limited to gaming on Call of Duty. I play a various amount of other games. In my PS2 days, I used to play Jak and Daxter: The Precursor Legacy (as well as Jak 2 & 3), Grand Theft Auto: San Andreas, Tony Hawk Pro Skater 3, Guitar Hero 2 & 3 etc. And some other games I play on the PS3 are The Last of Us, Fallout 3 & New Vegas, Infamous 1 & 2, and I've played a bit of Grand Theft Auto IV. I've played every main Call of Duty title except for Call of Duty 2 (waiting for them to make a PS3 port like they did with Call of Duty).

I required Rollback rights on the 12th of December, 2013. Reminder to self: Start working with images as to acquire Custodian rights.

In you and I, there's a new land

I need your affection more than you know (Reversed)

Where fears and lies, melt away

I need your affection more than you know (Reversed)

And now you having hot flashes

All the shit you ever wanted in one MC, I pass it

Do not rap if you do not practice

Now get ready for Knock Madness

Damn, what has the world come to

I swear that we used to be slaves

And Martin Luther King had a dream

I bet he turnin' over in his grave

Look how we behave, my black people

We don't even act equal, we act evil

Why? Because it's easy, and we see diamonds

And our favorite rappers go off and preach violence, we're weak minded

It's no coincidence, they nervous when they see us coming

I kick down your door, put an end to your fucking function

I ain't trying to be friends with all these rap niggas

I'd rather be tea bagged on top of cat litter

The only thing I fear is idle time

I put my all into this mother fuckin' game

And learn from every loss, so when I lose, it's still a gain

"You can prick your finger, but you should never finger your prick."

"The Catholic Church should really concentrate on these priests that just can't seem to take their hands off these alter boys. When Jesus said "Suffer little children, come onto me" that's not what he was talking about."

"We made 'em both up, Sanctity of Life and the Death Penalty. Aren't we versatile?"

"You ever find yourself standing in one of the rooms in your house, and you can't remember why you went in there? And two words float across your mind: Alzheimer's Disease."

"Boy, these pro-life conservatives are really something special, huh? They'll do anything for the unborn, anything. But once you're born, you're on your own....If you're pre-born, you're fine. If you're pre-school, you're fucked."

"You know what would be really nice. You fire a guy out of a high speed catapult....right into a brick wall! But the thing is that it would be over too quick, not good for TV. You'd need a bunch of catapults in a row. Rapid fire capital punishment. Fifteen catapults, while you're firing off one you're loading up the others. Of course, every now and then you'd have to stop to clean off the wall...."

"Here's something you never hear a guy say: "Stop sucking my dick, or I'll call the police"."

"I sense some of you are waiting for high-tech. I gotcha. You take a small, tactical nuclear device.....and stick it up a guys' ass! A thermonuclear depository. Preparation H-Bomb. Talk about fallout, huh? Or, you put it in the small hole at the end of a guys' dick. Yeah, a bomb in a dick. When it goes off, the guy won't know whether he was coming or going!"

"Here's something no one has heard, EVER: 'After I stick this hot poker in my ass, I'm going to chop my dick off'."

"It's called the American Dream, because you have to be asleep to believe it."

"If God truly gave you rights, then he would have given you the right to some food everyday, the right to a roof over your head, God would have been looking out for you. He wouldn't make sure you had a gun so you can get drunk on a Friday night and kill your girlfriend's parents."

"They would give up essential Liberty, to purchase a little temporary Saftey, deserve neither Liberty or Security"

Besides gaming, I also like to read various things. Politics and war being my two favorite topics, but love and sexuality are also close (it just depends how it's inputed. See TwoKinds for an example). I am also a YouTuber and Musician. I don't do any instruments (not anymore at least) but I do sing. I listen to a wide variety of artists from genres such as rap to country (even though this only consists Johnny Cash). I am big fan of George Carlin and still think his comedic works are the best to ever exist. I also have a large interest in Astrophysics and Cosmic history, and I think Black Holes are one of the most confusing, interesting, and beautiful things in the universe. Another interest and hobby I have is comics. I love comics. My absolute favorite characters consist of Doomsday, Superman, and the Joker. My favorite comics are the two that I own: The Death of Superman and The Killing Joke.

Retrieved from "https://callofduty.fandom.com/wiki/User:DremYolLok?oldid=2319396"
Community content is available under CC-BY-SA unless otherwise noted.