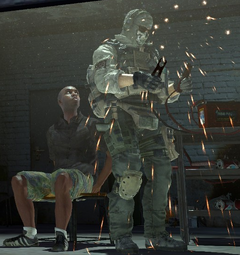 Hey, I'm EightOhEight, a sysop here. I play Call of Duty on the 360, and when I have time, I also make userbars, renders, and landscapes.

I'm a big fan of shooters, and you'll usually catch me playing one. I'll give out my gamertag if someone requests it.

I'm on IRC a lot of the time, so if you want to ask me something in private or just chat, I'll be there.

I'm also an active editor on the Battlefield wikia, and a sysop on the Army of Two wikia.

You can check out any major changes that I'm planning my my sandbox.

I was also elected User of the Month for April 2010.

Do you want a userbar, userbox, or signature?

Just ask me on my talk page, and I'd love to make one for you.

I render for game projects, which can be found on multiple wikis:

Extensive Contributions during the Overhaul - June 13, 2010

User Helpfulness Ribbon - June 13, 2010
Add a photo to this gallery

I am the creator of many contests. The ongoing ones right now are the:

The finished ones can be found at:

Pimp My Gun Contest I

All contest winners usually receive a userbar, userbox, and recognition.

Punch2YourFace - Pimp My Gun Contest I

What I've Done as an Administator

What I've Done for the Community

I have AIM, MSN, and XBL. If you ask for these, I may provide them.

Retrieved from "https://callofduty.fandom.com/wiki/User:EightOhEight?oldid=405648"
Community content is available under CC-BY-SA unless otherwise noted.