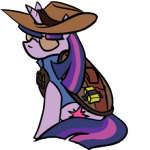 G36c RDS/FAMAS Silencer
Hi! I'm glad you decided to come check out my userpage! I'm a brony if you didn't have that figured out already. My interests include My Little Pony, video games, and sarcastic quips. My favourite hobbies include drawing and writing. If you want me to draw something for you, don't hesitate to ask--I love drawing and I could use the practice. I won't ask for anything in return! Oh, and one more thing. I don't like Rarity. She bugs me. She acts like a pompous bitch. If you're gonna act like a Manehattanite, go live in Manehattan. That said, one of my favourite MLP fan drawings is of Rarity--You can see it below.

1: Canada isn't cold. Not near the border at least. The reason the temperature seems to drop about 20 degrees north of the 49th is simply because we use a different measurement system--Celsius as opposed to Fahrenheit. 2: What most people perceive as typical Canadians are actually people from Newfoundland. We think they're weird too. 3:Yes we do like maple syrup. But so do you, so shut up. 4: Our lawyers wear robes in court. Yep. We think it's weird too.

We're not RPing. -Jar teh marksman on how they were too RPing

no it not -Brad h. on grammar, he good it has it

I use Nightly. beat DAT Cod4 trololololol -IW FTW about to be wiped off the face of the earth by the extreme force of CoD4's banhammer

SMIL HAS POETRY SAM HAS GIMP -Redskin-26 on... Dominatrixes? Yeah, something about dominatrixes.

Sorry it took me so long to write here. Um, I trust you'll take care of yourself, I wish you all the best. I toast one of the finest minds I have thus-far encountered:

Well, You wanted it. Twig (Talk)

Nice guy, nicely written fanfics, tendency to wear his mind on his sleeve and page formatting that makes me cry.

Here you go, I left a signature.

I also partake in writing MLP fanfictions. Fanfictions, I might add, endorsed by FSO. Here's the links to 'em.

Second Best OC pony cast, deals with mane six. A depressed pegasus with a violent past and a hunger for redemption deals with the death of his mother, and manages to scrape some mud from his name in the process.

Second Chance As you might have guessed, a direct sequel to Second Best. Make sure to read Second Best first. Unfinished.

What Are Friends For? A quick warning. The title is pretty misleading. Think Cupcakes, but with less(no) pretence and it's about fan-favourite background ponies Bon-Bon and Lyra.

When The Sun Turned An account of life in gryphon-annexed Equestria. Unfinished. (A cookie for anpony who gets the Stephen King reference in chapter 2!)

Retrieved from "https://callofduty.fandom.com/wiki/User:FuryExtraLarge?oldid=1812292"
Community content is available under CC-BY-SA unless otherwise noted.