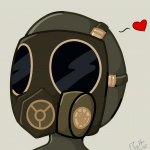 Any game I'm good at.

Any gun I can use.

We use the same IP! When I'm

GUESTBOOK: Sign your signature to show that you've been on this page. I'll allow it.Edit

I have been a Call of Duty fan since Finest Hour came out, and ever since then I have loved all the installments. I have been an Unregistered Contributor since I experienced the Asylum ghost noises and checked to see if it was reported. Of course by that time it was. I have reported a lot of things from Modern Warfare 2 all found by searching with my Original Sony Play Station 3. I am a boy who lives in a certain small town in Arizona (We Had an earthquake on Easter Sunday:)). My town is actually very well known, small, and dangerous. I'm surprised about all that goes on here. Things don't get to bad around, but it seems like this reminds me of 5th grade when I was class president at. My ranks for the wiki are located on User:Infected32/ Ranks on wiki.

Okay, so now, I'm a furry. Hate mail? Talk page, but I'd respect if it you didn't troll me for being one.

My Occupation of work is: Address finder of (An Organic Medicine place.)

Those ^, are youtube channels that I prefer to watch all the time. I'm sponsoring them all! (Without permission.) I'm 13, still young. Being very well known throughout all my schools. If you actually heard my voice, you can tell that I have a slight accent of being Scottish. It's not bad, it does get people's attention. No jk, I sound english. If you want to contact me on,

SKYPE: codwikiuser320 (Say you're from the wiki and I'll add you to my friends list immediately) [Semi-[Active]

OTHER WIKI'S: Infected32 [Somewhat Active, not a lot that I've wanted to report for finds.]

PEOPLE ON THIS WIKI THAT I'M RELATED TO: Funnyproject, and Headphones38.

If you find an Infected32 on anyother website, chances are it's me.

Other games I play when not playing CoD:Edit

Computer Games (LOTS of them online)

Pets (Yes I own them)Edit

Paws (My Orange Tabby who's most likely related to Garfield. He's a cute cat though.)

Tinkerbell (My Siamese cat who takes care of herself in times of trouble. Liberty's afraid of her)

Oreo (He was a stray until he found us, he likes to live out in our garage and hates coming inside. He's declawed, but not by my family by his family before. He's picked on a lot by the other cats. We think he's a Norwegian Forest cat but we need help confirming that.)

I swim in my pool.

Paws as he appears now a days in his usual stance, prone and asleep.

Tinkerbell with her evil blue eyes open. It's creepy and now she sees you

Oreo, yep the stray little whatever kind of cat he is. He's asleep in my bathroom and I woke him up and he started purring. Such a sweet cat.

I made this for the fan fic for Brennan Smith. It's a gun that his father gave to him when he found out he was going to war.

Brennan's picture for the fan fic. Real Brennan in other picture.

The real Brennan Smith who I went to school with. This was taken 2 years ago when I was 11.

Me as I appear in the fan fic. Real me was on a blog that's gone now. If you didn't see it then oh well. I still have that picture on my Skype account

Thought this was a funny Portal photo of the Companion Cube. Yeah, I agree.

My M16 as it is used in the fan fic. Nothing special to it.

I totally agree, let me get my Colt! Just hold 'em back until I get back!

Another one except this time firing bullets. Wouldn't you like to get hit with this gun?

My very first creation. I really don't know what I used to get this gun as it is.

I love the Companion Crate, which is a Reference to

Shepard's MP5 with a grenade launcher.

Chell, A day in the life character coming up, aight can't really explain much.

My rank in MW2 as of yesterday.

A cat jumping endlessly into a portal

Thought I'd add this for blog posts.
Add a photo to this gallery

Me when someone attempts to backstab me

Me when I take on someone of a lower rank

When I took on a six year old who thought he was good.

That's me that's how dumb I sound!

Me Gaz, Ghost, and everyone else who says it when taking on a group challenge.

Me when I surviving a large attack or some sort of airstrike, it's sung in song form.

Go ahead, we're out. Not my quote.

"Stop and remember that war is not a game, it is something where people suffer, die, and lose their dreams and hopes for the future. War affects people beyond the combatants. The Teddy Bear is really powerful in a way I just can't describe."

A day in the life

Retrieved from "https://callofduty.fandom.com/wiki/User:Infected32?oldid=2175378"
Community content is available under CC-BY-SA unless otherwise noted.