aka Rank I of the Discord Organization XIII

Staff Sergeant RoachForce141 at your services!

So, let me give you some biography. During my youth, my father had an old school computer, a Windows system, which had a DVD disc input. One of the games that he had for it was the first Call of Duty, Call of Duty. I then liked the game and a few years later, I got my own PS3 system with the game Call of Duty: Modern Warfare 3. Now one day, I had found the game of Call of Duty: Modern Warfare 2 within one of my game shelfs, so I started to play it and it became my favorite thing to do over the summer until it became "Hacker's Galore" sometime between 2009 and 2013. From Modern Warfare 2, I got Call of Duty: Black Ops II went down the line. From Call of Duty: Black Ops, to Call of Duty 4: Modern Warfare and to Call of Duty: World at War. During the time between the Revolution DLC in Black Ops II to the Uprising DLC, I had pre-ordered Call of Duty: Ghosts, I which I play today. And during the time between the Devastation DLC and the Invasion DLC in Ghosts, I had then pre-ordered Call of Duty: Advanced Warfare, where I now wait for it to arrive. If you want to find me, you can maybe find me playing zombies in Black Ops or Black Ops II, or playing Ghosts or maybe even GTA V. I also used to play the DS versions of World at War, Black Ops and Call of Duty 4: Modern Warfare. My favorite weapon is the ACR/ACR 6.8 and the NX-1 Disruptor from Extinction. I personally favor Direct Energy Weapons, Submachine Guns, Assault Rifles and Light Machine Guns. Just recently, I started to like the War Machine's Pack-A-Punched form, the Dystopic Demolisher. I have a fondness of electrical weapons such as the NX-1 Disruptor, Staff of Lightning and Wunderwaffe DG-2. In real life, I have a P250.

"Guys... Beinvenue a` l'enfer (Welcome to Hell)."
— RoachForce141 when entering either a multiplayer match, zombies, extinction or survival.

"Sniping you target is like hunting a tiny pebble. You wait for the right moment and... BOOM! Headshot!"
— RoachForce141 when using a sniper, waiting for a target and sniping the target in the head.

SWAT Force One is a PMC founded by RoachForce141 on August 6th, 2014. It serves as his PMC in following his orders, and participated in missions within CoD history. They are then disavowed after their second-in-command exposed various intel from their ops to the public, resulting in SWAT Force One in killing him.

Note: Für Rache is german for For Vengenace. The reason it's in german is because RoachForce141 is part German, as well as being part Scotish, Irish, French and a tiny bit of Indian.

Advanced Warfare is MINE!

Ever since I preordered Call of Duty: Advanced Warfare, I've been studying the facts from the game-plays Sledgehammer Games are giving us. As of now, I started to the see more gameplay of the Bal-27, which I found a class setup which could work when I get my hands on the game. I have the Day Zero Edition of the game. And now, I have the game in my hands. My goal in the campaign is to obtain EVERY piece of intel, which I completed on November 4, 2014!

If they are, I'm going to get prepared.

The weapons I would choses are the AK-47 with a black finish, a good old Desert Eagle, as well as the KF5 and MP5K.

My safehouse if you are looking for a safehaven is a camp in the Klamath Mountains in Northern California unless you want to travel to Northern Canada.

Let's hope the virus doesn't infect food. Hopefully, someone invents a device which could generate food for unlimited supplies. 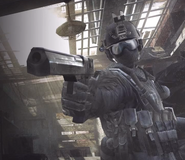 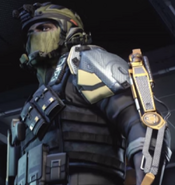 RoachForce141's look in Advanced Warfare
Add a photo to this gallery
Retrieved from "https://callofduty.fandom.com/wiki/User:RoachTheIntelCollector?oldid=2173246"
Community content is available under CC-BY-SA unless otherwise noted.