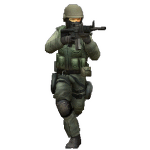 Welcome to your userpage! Why don't you edit this page and tell us a bit about yourself?

I'm totally funny, cranky, wacky, an addict to hacked games, silly, an idiot and surprisingly a freak or a moron.

I looooooooooove SpongeBob and Call of Duty ever since those are my interests.

Jack's appearance is that he has brown hair, a yellow jacket, a black shirt with a dragon on it right underneath his jacket, some navy blue pants and grey Converse sneakers.

Jack was born on 5th of November, 1940. His father was a US Marine and was in the rank of Captain. His mother, too, was also a Marine, this time in the rank of Sergeant First Class. Jack did well in his school years, from kindergarten to college, where he was graduated after that. He joined the CIA, then later the SOG, the USMC similar to his parents, the JSOC, the Delta Force and, also, the TF 141. He additionally joined the Army Rangers and the SAS.

Call of Duty: The Battle Against Terrorism

Look for documents.
Neutralize enemy MG positions.
Protect Davidson as he breaches the main room.
Plant C4 on the enemy armor.
Defend the exfil point.
Get on board the helicopter.

Retrieved from "https://callofduty.fandom.com/wiki/User:SpongeBob_IdiotPants?oldid=2431478"
Community content is available under CC-BY-SA unless otherwise noted.