All CoD titles since COD4

Crosman Stinger P311, any weapon obtained by the player

These are all the game accounts that I play CoD on.

Call of Duty: Ghosts - X360, but not always available

Some quotes of my own Edit

"I wonder what happens after round 10?"
— After reaching round 10 for the first time on Kino Der Toten

"Holy cow, this is difficult!"
— Whilst attempting the All Guns Pack-a-Punched in One Game challenge on WAW Der Riese.

"Holy fudge-a-duck, there's a lot of you, isn't there?"
— When swarmed

"He just ate shit! And I helped him do it!"
— Upon recieving an Assisted Suicide

"Where are you going? Seriously? I am right fucking HERE!"
— Occasionally when another character throws a Monkey Bomb, Gersch Device, or Li'l Arnie

"Will you please just PISS OFF?!"
— After killing a zombie that hit him

"We get that already."
— In response to Jack Vincent

"What in the bloody FUCK am I supposed to do with this?"
— Upon recieving the Electric Trap or Turret in TranZit

"What happened?"
— Upon rolling the box whilst another player is trying to

"Lookie what I got!"
— Upon recieving a map-specific Wonder Weapon

"Nope. I call bullshit."
— Upon being trapped by a riser

"You really had no other choice than to give me this?"
— Upon receiving a pistol or sniper rifle

"So, if I take it now, can I give it back later?"
— Occasionally upon buying a wall weapon

"Alright, who threw the rotten meat at me?"
— When swarmed.

"Just, go away."
— Upon killing zombies with the Thundergun.

"You could say this was a very ballsy idea on Treyarch's part. No?... Alright, I'll shut up now."
— Upon buying a Gobblegum

"1, 2, 3, 4... Someone jammed the system. Not all of you are supposed to be full."
— In reference to an update that caused all of the Gobblegum machines to be active at once.

"Boom bada bing bada bam!"
— Upon multiple headshots in one round

"Maybe if I just push here... Nope. Won't budge. So how...?"
— When trying to open a door with insufficient points.

"Can I not just take that one? It's not mounted by anything. Just need to get some leverage, and... Someone glued that on really well."
— When trying to buy a wall weapon with insufficient points, and another player has bought the weapon at some point during the match

"Do you mind? Kinda busy here!"
— When hit by a crawler

"It was a good attempt, but a failed execution. In just about every sense of the word."
— Upon killing a zombie that hit him

"Typically, a three-headed beast would be something to talk about. At the moment, however, I don't feel like talking."
— Upon Margwa spawn

"So, if I gut him from his armor like a fish, can I use it? No? Damn."
— Upon Panzer Soldat spawn 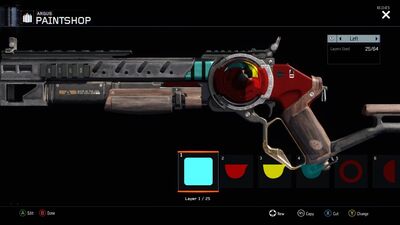 The Ray Gun paintjob on the Argus 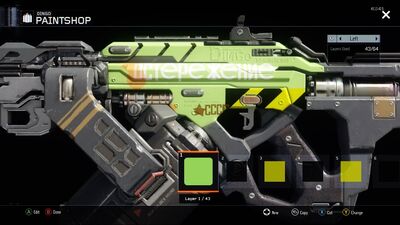 The Thundergun paintjob on the Dingo.

Retrieved from "https://callofduty.fandom.com/wiki/User:SteveHeist?oldid=2398207"
Community content is available under CC-BY-SA unless otherwise noted.