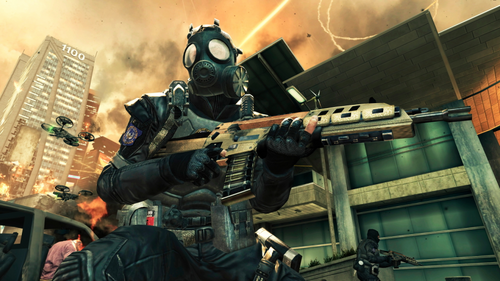 According to this article, NOW gamer were able to preview two levels of the Black Ops II campaign.

They can confirm that "Black Ops 2 puts the president's life in your hands". The first mission where the player is put in this scenario is called Protect P.O.T.U.S. It introduces the player to the "volatile world of 2025", which is being terrorised by one Raul Menendez, who has hijacked the computerised and automated army of the United States. Raul has sent this army to Los Angeles where it is to attempt to eliminate political leaders of the world at a G20 Summit being held there. David Mason and Harper are given the task of evacuating the President to safety.

The mission begins very suddenly and with a violent tone, showing that "Black Ops 2 means business. " David Mason is tasked with surveying the area, and to receive presidential plans, and then to escape an already-evacuated Los Angeles with the now-confirmed female President in order to prepare a counter-attack against the automated army.

During the mission, the player sees that the LA skyline is in total ruin, while multitudes of unmanned vehicles and stealth bombers continue to wreak havoc.

Before this is seen, the escape vehicle the team is using is run off of the road. As Mason regains his standing, human enemies begin to attack the team, although their nationality still remains unknown. Mason helps his team return fire with his Type 95 rifle. On account of a low visibility, Mason uses an x-ray ACOG scope to help see through the mist. All of this happening while drones fly ahead who could kill you in seconds if you linger around too long out of cover. After the human enemies are dealt with, Mason gets in the turret of a crashed military vehicle and fires barrages of "Skyburst" missiles, destroying multiple drones. Mason rejoins his squad in a large shopping mall after gunning enemies down with his KSG-12, and after finding out the mall is full of enemies, sends 10 Quadrotors in to take as many enemies out as possible.

The player is given the choice of whether to rappel down a damaged stretch of road to help the President at CQB, or stay above and help at longer range at one point in the mission. These types of decisions will come at the player "thick and fast", and when combined with Strike Force Operations, will really change up how the game takes course, and the final outcome.

The Quadrotors sent in can be controlled autonomously, or the player can assume control of one of them from a first-person perspective. The choice is once again up to the player.

After this happens, a skyscraper topples over, displaying the upgraded game engine's capabilities fully. When Mason is ordered to give air support, he enters a Harrier jet and does so. And it's fully off-rails.

After the jet part of Protect P.O.T.U.S., a Strike Force mission begins. Strike Force missions are small campaign missions where the player is given full control of what happens, they can choose what wars to wage and how to approach each objective. The mission shown off takes place in Singapore, where a strike force deploys onto a dock where a ship containing sensitive documents is docked. The ship must not be allowed to leave, so the strike force is tasked with destroying two missile shields within 20 minutes. If this objective is failed, the mission is not restarted, instead it continues, taking a different path.

In Strike Force, it is possible for the player to view the battle from one of their team's perspective, or take an Real Time Strategy-esque perspective, called Overwatch mode. In Overwatch mode, you can use x-ray vision to find enemies and strategically guide your forces around them. The player can even take it upon themselves to pilot a vehicle to provide support.

Zombies is now "integral" to the multiplayer, with an addition of a 4 vs. 4 mode, where two teams pit it out against each other to earn the most points. Mark Lamia also comments that multiplayer has largely been built from scratch, and will appeal to all skill levels.

So what do you think? Tell us in the comments below!

Retrieved from "https://callofduty.fandom.com/wiki/User_blog:Callofduty4/Black_Ops_2_campaign_demo,_much_info_released?oldid=1930081"
Community content is available under CC-BY-SA unless otherwise noted.