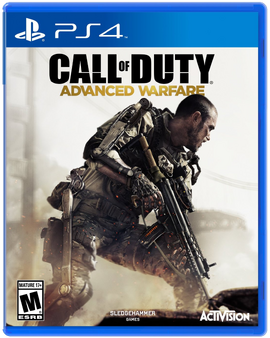 Call of Duty: Ghosts was a disaster and the final nail in the coffin for the gutted, shriveled corpse that was Infinity Ward. Sledgehammer is finally here with their first game, and while it may not truly be the "next gen" Call of Duty that many were hoping for, we can all agree on one thing: It's a heck of a lot better than Ghosts.

As with my Ghosts review, all pictures besides the cover art were taken by me of the PS4 version of the game.

So there you are riding through the Atlas facility, Kevin Spacey is shouting at you over the noise as you take in the epic scenery, "What you are seeing is advanced warfare!" he says as you are severely... underwhelmed... because despite his need to shout there actually isn't anything loud going on, even from the game's own music soundtrack. I just don't get it, why is it that Treyarch seems to be the only Call of Duty developer that still understands the value of music? Most of Advanced Warfare, like Ghosts, is played in complete silence other than gunfire and the occasional shout. Could you imagine the first level of Black Ops II without Savimbi's Pride playing? The fall of Berlin in World at War without the Russian theme playing? When music does play it is also often quiet and while this comes down to personal taste I feel this is probably the worst Call of Duty soundtrack ever made anyway which is unfortunate.

Also in terms of sound Sledgehammer made the incredibly stupid decision to make the main character, Mitchell, talk and be characterized in cutscenes but become a mute in gameplay. This was a poor decision in Metro and it feels like a worse decision here. It is incredibly awkward for your character to simply have no reaction to the game world, especially after it has been established you are indeed a character. The reason you didn't speak in the other games was that you were supposed to project yourself into the protagonist's place. That doesn't work here, at all. There is no excuse for this decision. I never played Black Ops and thought "Wow, if only Mason didn't talk, then I'd feel REALLY immersed!" 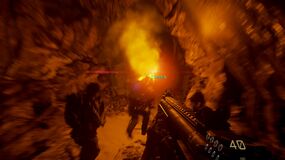 The game's plotline also doesn't seem to have much of an idea of what it wants to do with its own main characters. Ilona for example has horrible placement throughout. She appears once on the side with one line of dialogue on the second level, shows up later just in time for the obvious plot twist, is the only one who stays with you after the plot twist for a little bit until another character shows back up, she then disappears. Entirely. Not trace of her. Not even in cutscenes, she is never mentioned. Then one mission she randomly shows back up and remains there for the rest of the game as one of the main protagonists. What... the... heck... Sledgehammer? Would it not have made more sense to put her in Joker's place seeing as he is completely unimportant? Why did she have to disappear for so long in the second half? Gideon also has similar odd placement but not as extreme.

Of course one of the game's main selling points is the exo-suit, I hope you weren't planning on using it much in single-player because most of the time you will be very limited. Without the double-jump I barely even can remember the strafes are there, and the double-jump is literally disabled for around half the game. I also hope you are ready for some of the most obnoxious QTEs ever made because they are right here. Enjoy getting killed during an exciting action sequence just because you didn't notice the one little tiny white button prompt in a random area of the screen in time. It will happen alot.

One more complaint until we get to the good stuff: why the nelly did I not see a lot of the fun weapons and equipment for the game in the campaign? Like the dual-wielded heavy machine guns where you can lock down yourself to remove movement but get more accuracy? What about the heavy semi-auto energy rifle? Why did I not know this stuff existed until I unlocked it in the multiplayer? Perhaps the equipment load-out system from Black Ops II should have returned. 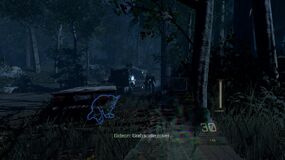 Now the good stuff, it is of course, a very fun game. It is far, far better than Ghosts obviously with much better characters and a, while predictable, very fun story. The antagonist (one I won't spoil but you'll probably have guessed just from the trailers) is a very good one and well fleshed out, probably being the second best behind Raul Menendez. The pacing is fairly good and near the end I certainly got to the point where I didn't want to put the game down due to wanting to see how the rest played out. Over-all though it was a fairly par for the course campaign that doesn't quite measure up to many of the ones that came before it. Still lots of fun regardless. 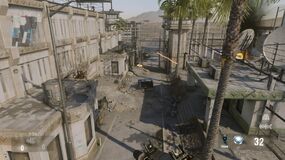 Best part of the game right here. While the exo-suit is severely underplayed in campaign, it is put to great use here. Kill Confirmed in particular is a mode that benefits massively from the increased movement. The wonderful scorestreak system as well as the Pick 10 system returns, now called the Pick 13 system due to including the scorestreaks, giving you even more options.

The weapons and load-out systems are the most varied we've yet seen in Call of Duty. While Black Ops II was too timid to really put that much advanced tech into multiplayer, Advanced Warfare is far more bold (although perhaps not always enough) giving players things like lasers rifles and dual-wielded mini-guns. You also can have a number of exo-abilities which sadly don't do much. Many of which really aren't worth bothering with. "Silence your footsteps." Really? That was already a barely useful perk, you've just made it a limited time effect option? I estimate 97% of the enemies aren't listening to your footsteps. There are also temporary health boosts, that will make it so you can take like 3 more hits from an assault rifle for a couple seconds. There is a speed boost that is barely noticeable. Hover worked great in Transformers: War for Cybertron where you could take a decent amount of damage before dieing and got an upgrade to damage output, but in Call of Duty where you die instantly from almost nothing using Hover is just suicide. Really the only one I ever used is cloak, which makes you slightly harder to spot from a distance for a bit. Very unfortunate Sledgehammer was too afraid of balance issues to go all out with the abilities. 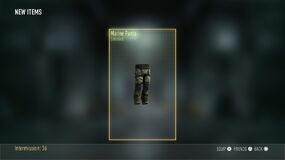 Despite this the game really is absolutely fantastic. The exo-movement really does change the game for the better. Call of Duty's skill still does mainly came from being able to predict and react quickly to engagements, as I've discussed previously, however Advanced Warfare truly gives players the ability to control engagements in their favor if they are smart enough and fast enough, giving a new layer of skill to the game. Soaring over a players head and either butt-slamming them or shooting them from the back is fantastic, as well as the ability to boost dodge out of the way of hazards that would have other-wise meant your death. The game is fast, fun, varied, and is easily one of the best multiplayers Call of Duty has had.

A loot system was also introduced. I actually really like it, since it doesn't remove the original unlock system and instead compliments it with the occasional unique variation of a weapon. They all seem well balanced. Its main purpose seems to be for distribution of customization items for your character, which while not perfect is certainly better than Ghosts' system. What I don't understand is the limited time loot you get. Some loot will have a timer on it, for example a helmet that will dissapear after 30 minutes. Why? That is an annoying feature only used in bad free-to-plays, why is it here? Thankfully those drops don't happen that much. 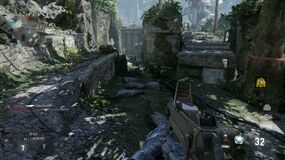 For most people this probably was met with a resounding "meh." If you've played MW3's Spec Ops Survival you know what to expect. Its the same with some differences to the system I'm not a fan of and the exo movement.

Straight off the bat let's just say that I find this superior to Spec Ops survival. This is because of the exo-movement abilities, the variety of enemies, and the ability to build your character up with stat-boosts and perk drops.

HOWEVER it just isn't that great. It is a fun little distraction and not much else. I understand the idea of having different classes, but limiting the boost strafe to the "Light" class was just silly. No one wants to be the other classes because of it. They'll be able to use Heavy Weapons and such later with a perk anyway. I also miss the ranking system Spec Ops survival used, it gave me further drive to get the experience points and I enjoyed unlocking my arsenal over time, instead of having it reset every time I start a match. Over-all, alright but not that fantastic.

Filled with issues and iffy design choices in anywhere that isn't the normal Competitive Multiplayer, Advanced Warfare is a flawed but still very fun experience. The amount of content is still great and the exo-movement gives you the best reason yet to come back to the multiplayer.

Overall if you, like me, really need a good Call of Duty again for the new consoles this is a must buy, even at full price. If not you may want to rent it and stick to Black Ops II for a while longer until you can get a price drop to around $40 or lower.

Thanks for reading. Checking my blog section will give you more editorials about Call of Duty to read and you can go here for more game reviews. You can also follow me on Twitter cuz im a preteh fun guy who tweetz lots bout gamez and stuff.

Retrieved from "https://callofduty.fandom.com/wiki/User_blog:Magma-Man/Call_of_Duty:_Advanced_Warfare_Review?oldid=2172877"
Community content is available under CC-BY-SA unless otherwise noted.