In an interview for ausgamers with Treyarch's studio head Mark Lamia he has spoken about the new sniper in Call of Duty: Black Ops II.

Lamia began by saying, "In the demonstration of LA, we showed you a sniper weapon, but it was not a sniper weapon like anything you've ever played with in Call of Duty and in fact, if you just stopped right there and looked at it, there's this weapon that you can see through walls and shoot people through. Right?"

"Is that realistic or is that not realistic? Well I'll tell you how we think about it, and how we have to justify it to ourselves before it makes it into the game, is we go: 'ok, in the future, what would a sniper rifle be, and what would be a really amazing optic for that sniper rifle?'. Well you flew here from Australia and you probably had to go through those TSA scanners right? Where they put your hands up here and they can see through everything, well there's that millimetre wave technology, it exists in large form-factor right now." "Every 18-24 months, there's this thing called Moore's Law, where processing power is going to double. Right? It's going to double. That is very hard to conceptualise. In fact, you almost have to look to the past to even get an idea of what that actually means. Well look thirteen years back. The PS3 or the 360 that you can go buy, is the same processing power as the most advanced piece of processing kit the military would have running. The military."

"So you project that out. Go back to the millimeter wave technology; processing power continues. We also know that as time advances, form factors get smaller. We know that from our own personal consumer electronics devices - they're all smaller, things get more efficient."

Treyarch plan to base this on a new prototype weapon called "Metal Storm". However the gun will not be called this in-game.

"It's an electronic charge as opposed to a gunpowder charge. It fires a million rounds every 60 seconds. That's today! Now it's in big form-factor, again we're talking thirteen years out. So now, from a gameplay point of view - because you have to balance that, because that's a pretty powerful weapon suddenly - if you're putting this technology on a sniper weapon, how do you balance that? Well, it's a charge-shot mechanic you have to hold down. The longer you charge up, the more you can penetrate. If you don't charge up enough, you're not going to be able to penetrate the surface material." "That's a combination of fiction with game-balance with everything else, the drones are the same thing. You saw the quadaped, the CLAW. That went through a lot of revisions as well for the team to get that right -- to make that feel like 'yeah, this feels plausible'."

"Does that exist right now? No. Does the other weapon exist right now? No. But every single one of those things has a backstory. We know that there are quadrupeds that are basically mules - robotic mules, that can carry large amounts of gear and things like that. Well, how long before that sort of thing could potentially have a camera or a weapon mounted to it or something like that? So we go through that whole process for everything."

"The cool thing about our fiction that I think works really well - just from a gameplay point of view, so let’s pull the fiction and help serve the gameplay in this point - what happens is in our fiction is our villain, Raul Menendez, steals the keys to the US military infrastructure and turns our advantage - which is this advancement in robotics and drones - on us. Turns our own weapons on us."

"So what that means is, while you’re playing with them as allies, at some point in the fiction, you’re going to be fighting against them. What that means is now you’ve got entirely new AI that you’ve never fought against in a Call of Duty game. Flying AI or quad AI or the Cognitive Land Assault Weapon, and what that means is that these aren’t humanoids, which means they might require different strategies to take them out."

"In this way the fiction, and our desire to create a compelling fiction, but also introduce new kinds of gameplay sort of serves each other really nicely. " 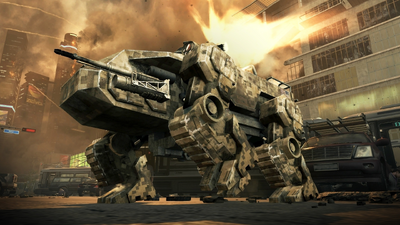 "As we were wrapping up Black Ops 1, the team was really firing on all cylinders. And while we really gave everything we had to that, and we were really happy with it, we kind of felt like, as a team, that was the first time that the entire studio had just focused on one game."

"So we were really proud of what we’d created, but we felt like that was kind of like the base-level. We felt like we could push it so much more. So that’s why you’re seeing so many new things go into Black Ops 2."

"We felt like we created something as a great foundation, we felt like we had just scratched the surface with the fiction, we loved the storytelling -- this is the history that you didn’t know about and these are the black operations.. We liked the tone of it -- dark things and dark places and everything that’s going on in that world. The multiplayer team was excited about what we’d created; the zombies team was excited about what we’d created."

Retrieved from "https://callofduty.fandom.com/wiki/User_blog:N7/Mark_Lamia_discusses_the_new_Black_Ops_II_sniper_rifle_among_other_campaign_details?oldid=1930197"
Community content is available under CC-BY-SA unless otherwise noted.