A new Black Ops III video has been uploaded by Call of Duty on YouTube, which goes through the Cyber Core tutorial, which shows a bit more about the co-op campaign. The video also includes an extended cut of Ramses Station, which was seen exclusively at Sony's PlayStation Booth at the E3 event.

The video has a runtime of 13 mins and 36 seconds.

Please note that the features and performance seen in this video, may vary in the Xbox 360 and PS3 platform versions.

"Take a deep dive into the Call of Duty: Black Ops 3 cooperative campaign with the Cyber Core tutorial and an extended cut from "Ramses Station" as seen exclusively at the Sony Playstation E3 booth. Call of Duty: Black Ops 3 is a dark, gritty future where a new breed of Black Ops soldier emerges and the lines are blurred between our own humanity and the cutting-edge military technology that define the future of combat.

Designed for four-player online co-op or solo play, players will encounter epic cinematic moments and open-area gameplay, allowing players to approach the game with a different strategy each time they play. And now your campaign character is completely customizable: from weapons and loadouts, to abilities and outfits, all with full progression systems and a personalized armory to show off accomplishments. With these and many more exciting new features, Call of Duty: Black Ops 3 aims to deliver a constantly-evolving campaign experience.

See you on November 6, the new Black Friday.

Pre-order now and get access to the Multiplayer Beta coming this August, first on PS4. Learn more at: http://www.callofduty.com/beta"
— Official Video Description 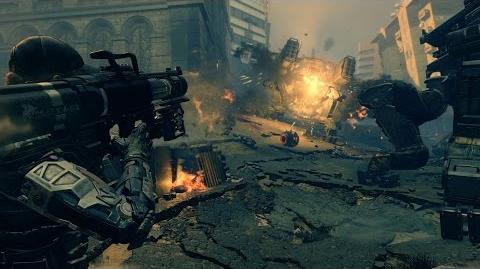