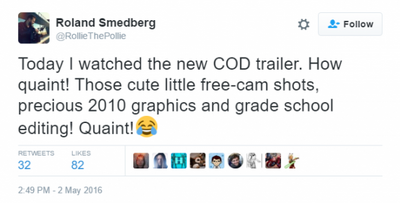 So as many of you may know Call of Duty: Infinite Warfare has gained a lot of hatred and backlash from the community. So given all this I've came up with three reasons that I feel has caused the most hate.

Now I know this may sound unfair, but ever since Ghosts Infinity Ward has received a lot hate from the community. A lot of it was because of how much people dislkied Ghosts. In everyone's eyes and including my own the game was poorly designed and it was just not fun to play. I didn't even play much of it when it was still relevant just because of how much it rubbed me the wrong way. I only got back on it when DLCs were released. This was the case with most people and playlist populations were down most of the time so it was hard to find a match. I also remember all the videos putting both Infinity Ward and the game istself down. There was a Frozen "Let it go" parody and JDfromNY206 made a video chewing Infinity Ward out after he broke his controller from a match of the game. MW3 also received negative feedback. While it wasn't as bad as Ghosts it was a step down from MW2 and was half assed in most peoples minds, and while the MP was mostly done by Sledgehammer Games, the campaign (which I would assume Infinity Ward did more work on) tried so hard to outdo MW2 that all the missions were heavily ridiculous, and the Special Ops missions were nowhere near as great as MW2's. Other hateful things include Robert Bowling saying there would be no Last Stand and yet keep Final Stand, as well as add Dead Man's Hand, or Mark Rubin trying to get people to think there was no "Quickscoping" in Ghosts with an oddly worded tweet when it was still in the game, and last but not least when Tina Palacios made her twitter account private when she's the "Community Manager". With these things combined I can only assume people don't want to deal with their shenanigans again, and I know I don't want to.

While some people may care to disagree, I strongly feel this is one of the reasons why. It seems the community (including myself) don't want sci-fi in the main part of the games (which is Campaign and MP). While I know they said there's no aliens and it's simple human vs. human it's still too ridiculous even for Call of Duty standards, and while we've been to space before this game takes it to a whole new level. Eventhough Call of Duty isn't the most realistic of all FPS titles it's still a bit too overboard and I feel with these reasons fans and myself are turned off.

It's very clear at this point the community is tired of the 21st century and future setting, and want to go somewhere new. I honestly don't blame them, I too feel it's time for a more approiate change and the past is most likely that answer. While I'm not going to suggest World War I, World War II, or the Korean War. Instead the Vietnam War or the Bay of Pigs Invasion. While Black Ops has already been there, I think it didn't go deep enough and that's what they need to do next in my opinion. The future and 21st century setting have been way over saturated and it is time to try something new, and it appears many fans recognize this. Given these reasons I think that is a reason why the game is getting so much hate.

So those are just my reasons of why fans (and myself) are not too happy about this new Call of Duty. If you have an opinion on this topic then leave your thoughts down below in the comment section. Thank you for reading and goodbye!

Retrieved from "https://callofduty.fandom.com/wiki/User_blog:Super_Gamer_Ghost/Infinite_Warfare_Backlash?oldid=2315799"
Community content is available under CC-BY-SA unless otherwise noted.