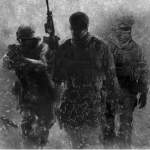 So far as we know. He is dead. Don't put wounded till we get more info... I.E When MW3 comes out. Thanks. Twig (Talk)

The same logic with putting wounded, It looked like he died and no more Intel is known about it. So the safe point is to put killed. Twig (Talk)

What was the one you made? If it was recent, you were not logged in, so I can't tell. -

For things like those, you need a proof. It was also badly put there. -

Ok, I can put it on the article. And out of interest, how did you get it? -

If by "not their knife" you mean it's not a Fairburn-Sykes Commando Knife, then yes, that's true. It's also technically irrelevant, since that knife isn't issued any more; most knives tend to be private purchase, particularly if it's engraved like that one is. Of course, the presence of an engraving like that on a combat knife is another matter altogether.

What that means is there is no point to engraving like that on any sort of field knife. If it was a presentation blade or other wallhanger, then it's fine.

I didn't revert your edit, it was Raven's. I only reverted an anon's edit. cone.exe 言うのページ

Retrieved from "https://callofduty.fandom.com/wiki/User_talk:A_BL1ND_K1D?oldid=2090403"
Community content is available under CC-BY-SA unless otherwise noted.