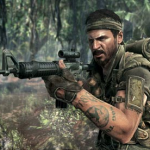 Sorry to say this pal, but chat is dead as of now. Like, deader than the dinosaurs. Servers are down apparently, so nobody can't go into chat atm. k that was all bye.-Diegox223 Zed's dead, baby.

They're simply not very notable points.

Hi. Your recent image "Cod22.jpg" was deleted as it did not conform to our image policy. It was both badly named and incorrectly licensed. When uploading in the future please ensure to follow the naming and licensing rules as seen on the policy page, failure to do so may lead up to a block if enough warnings are given. If you need any more help on image uploading feel free to ask myself, anyone on the Custodian team or Sysop team. Thanks.

Are you referring to the navigation box at the top with the MW3 weapons? I made a template for that. I think I its a modified combination of Carbonite's and Bohater's navigation boxes.

Oh sorry, really misread what you were asking. There is a template for that, Template:Infobox/soldier/user. If you want, I could modify your page so it uses the template. Again, sorry about me misreading that so badly.

Just letting you know that an edit you did was wasn't really correct. The infobox we use for characters is infobox/soldier, and the one you replaced it with wasn't the one we use.

On another note, I saw that Legos sent you a message about helping you put a better infobox on your page, would you like me to do it right now?

Yeah I do, do you come from Australia?

I've added the infobox to your page, as well as a picture of Woods in the infobox.

Users are only permitted to have one account. Please do not create alternate accounts. If you want to make a new account, to replace your current one, then tell a user beforehand. Secondly, using your own IP to spam yourself and other pages is just an annoyance, and may lead to your main account being blocked due to the IP being blocked. Thanks.

Also i was reading on a talk page for an anomous user and saw this (this will back my case) 'Some IP addresses change periodically, and may be shared by several users.Hunter2013 (talk) 07:19, May 28, 2014 (UTC)

Saying that "it was this guy i know who was doing it" hardly flies. It's linked to your IP address, so it was on your computer. You may want to read the point made on COD:NST regarding other users using your PC.

Furthermore, after performing some more checks, your current IP is blacklisted as a proxy. Which makes it hard to believe these alternate accounts are in any way innocent.

Would you like me to do it for you? Its kind of hard.

Herro, When you gonna be on?

Due to your unacceptable behavior, you have been blocked for 3 days for abusing multiple accounts. You are welcome to come back and edit sensibly after the block is up, however it is very strongly advised that you read and review our policies thoroughly before you start to edit again. If you believe your block is unfair you can leave a message on this page and an administrator will consider it.

Any more unacceptable behavior and another block will be issued. Thank you.

This is a very old message, you are no longer blocked.

Your account is linked to so many proxies, some of which have avoided blocks, I have stronger reason to believe that account is a sock puppet, not another person.

That's not really much evidence either way. But your account has logged in though so many proxies, all of which are blacklisted, we can't really confirm that this other account is all that innocent. I apologise if the account s in fact your friend, but so far, despite still having access to edit his own talk page, they've not said anything on the matter, only you have.

Yes, with Blog Patrol rights, you are able to delete comments. You are also able to edit blogs, although this should be used rarely. Hope that helps.

Well, actually, since your blog is dead, I'm not supposed to delete any comments that are currently on it, unless the blog is bumped... which is what you just did. Sorry, but you can't really do that, trying to keep a blog active once it's gone dead.

And that might not of translated over to the video game. Twig (Talk)

Such as? Twig (Talk)

Retrieved from "https://callofduty.fandom.com/wiki/User_talk:Hunter2013?oldid=2246883"
Community content is available under CC-BY-SA unless otherwise noted.