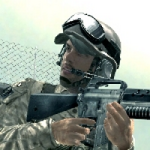 I remember a long, long time ago I played shi no numa with a guy called skullrod, he also had the skull thing as his avatar, just a coincidence? (Sorry for bad english, headache + tiredness = cant think straight :() A Lonely Nomad 16:25, August 2, 2010 (UTC)

Are you kidding? That game is *epic*. I mean, heavy-fucking-metal, combined with awesome Jack Black humour and awkard stares, nice sweet combos that really rip apart enemies, sweet vehichles with guns, guitar solos to melt faces off, awesome RTS style grand metal battles, headbangers vs. groupies, and what-have-you. Also, the radio is called the mouth of metal, and all things metal are revered as gods.

Oh, and Ozzy is pimping my ride. Now that is just awesome.

I have a gazillion other games though. I kinda lost track Lordofthelargepants The Zipper and The Pockets 22:13, August 2, 2010 (UTC)

It's online is meh. It's fun with a friend, but the rts battles are just recreations of the SP levels made to be perfectly symmetrical. and online, symmetry is boring. Lordofthelargepants The Zipper and The Pockets 00:22, August 3, 2010 (UTC)

You have no clue. Try doing a goddamn solo.... WITH LAG. seriously, without, they are easy, with... well, you just have to know whether to press them in advance or afterwards. Depends whether you're clientside or serverside, ugh. Lordofthelargepants The Zipper and The Pockets 00:25, August 3, 2010 (UTC)

Would be greatly appreciated here. Dolten

I don't have much to put on it though.

I wasen't trying to image boost, but yes, those images are kinda pointless.

The game is pretty amazing,the graphics are not like MW2, But the game is more realistic in the game play. Like planting C4 on a building and then making the building cruble on top of the other squads. And in the multiplayer you are in squads. Do you play PS3 or XBOX?

It was no trouble. By the way, I like your golden signature.

What do you mean?

Some unregistered contributer created it, and I put [[ instead of {{ on the first part of the template, so it didn't do anything. THEN when I went to fix it, It turns out I must have created it while it was being deleted and it made itself again. I in no way shape or form edit boosted. --

Thanks for the thoughs, but I like the black box, as it fits in with the back ground. Thanks anyway! Dolten

There is a real life image on .357 magnum page, is it needed?

Thx for the heads up!

I am starting to play COD4 much more even though I play MW2.

What game mode do you play?

I play Headquarters and free for all mostly some times a team death match,and some times but not common a cage match

O.K. I am going on a trip thursday for couple days.

I'll try to friend you.

Sorry about that to have fun on your trip.

Can you make me a signature please? Can it have Sgt (liked to my page) Desert Eagle Edwards (Likned to my talk page) Please? Thanks man!

I can't do it Edit

I just can't do it. I guess I'm a failure. Wanted to be a Homicide detective when I grow up. I just can't. I can't get a point out.

I can't, The guy keeps getting stuff from somewhere. Any way, Thanks for the consideration.

I know, Scotties like the awesome genius brother I wanted ,but had a sister instead. When I was a UC, I thought he had 10+ tabs.

Yes I made it, but I don't know the code to template it to make it link to my user page. Until I work that out it's just there so people know it's me.

Yeah, I sorted it, thanks to a very helpful admin! :D

Adobe Photoshop CS4 Extended Edition. And why thank you. Is this some sort of hint that you would like one made....? :D

I could never hack GIMP, despite how good it is. I went through CS3, CS4 and I do have CS5 somewhere (all extended) because my family is rich like that :D

Despite the 3D text capabilities, you don't use them really until CS5 - and generally that's for animations. There's an easy hack for GIMP that let's you do 3D text, though. Just google it! :P

You should, but you won't really use it. It's a bit of a gimmick tbh. Just get fonts from Dafonts and use those

No worries, any time

Oh, I see. Actually CodExpert made the first one.

Thank you very much!

OK, thanks. If you can find an article where they look nice and don't cut off too much of the images, then you can use it, but using a square gallery with most pictures crops a lot of it off.

Awesome mate. Well yeah. But what kinda stuff will you use it for? -

You've been a good help for the wiki and it's so sad seeing a user say goodbye to the wiki. See you if you ever come back...

Where the Wild Things Are Edit

"So wake up sleepy one
It's time to save your world"

The meaning seems to be quite literal.

Open your eyes and start thinking about how to make things better, not the petie things kids dwell on anymore.

"Steal dreams and give to you
Shop lift a thought or two
All children touch the sun
Burn fingers one by one, by one"

Basically, take what we've tought you, and pointing out that anyone can do it but they aren't exactally flocking to the idea.

"Will this earth be good to you?

Keep you clean or stain through?"

Is it something that will happen it'self? Or that only gets worse.

"You're where the wild things are, yeah
Toy soldiers off to war"

We're the ones sending you to your death.

"Big eyes to open too
Believing now under sun and moon
But does heaven know you're here?
And did they give you smiles or tears?
No, no tears"

Will anyone help you? (Older and younger generations) No, no they won't.

"You swing your ass all down Call to arms, a trumpet's sound Toy horses start the charge Robots, chessmen standing guard We shall never surrender"

It's only getting started, there may be no fix.

"So close your little eyes"

Basically, what I've told you on PSN plus:

Everyone must play a part, and everyone can, though it will be costly.

I'm sorry I couldn't give a good in-depth line-by-line conclusion, I've never been good at it.

Hi, please could you tell me how to make a signature?

Your signature has been moved from Template:SigRod to Template:Signatures/Rod, I suggest you update it in your pref. --

Retrieved from "https://callofduty.fandom.com/wiki/User_talk:SkullRod?oldid=1958793"
Community content is available under CC-BY-SA unless otherwise noted.