6,004 Edits since joining this wiki
May 31, 2014
6 Discussion posts
(Difference between revisions) | User:Soap Shadow

Dude I thought you were dead back in Prague, why didn't you tell me? Price

Sure, how would you like your signature to look?

Hi. Your recent image "150px-6883717.png" was deleted as it did not conform to our image policy. It was both badly named and incorrectly licensed. When uploading in the future please ensure to follow the naming and licensing rules as seen on the policy page. If you need any more help on image uploading feel free to ask myself or anyone on the Custodian team or Sysop team. Thanks.

Failure to adhere to warnings will simply result in more warnings. Next time you're in chat please do not try and blame people for "hating you" for failing to adhere to your warnings. Poor behaviour such as that may result in a ban.

Here is your signature:

I hope you like it! If there's anything you want changed, feel free to tell me. To use it, sign with {{Signatures/Capt. Soap MacTavish}} ~~~~~. Enjoy! 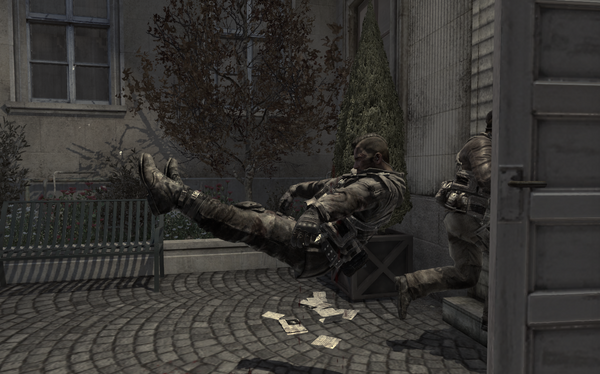 Re: Syndicate is not real

Thanks for the info, I didn't actually know his birthday. I knew his name is Tom Cassell although he usually represents himself as Tom Syndicate, so it's not enough counter-evidence really. But considering the false birthday, the way of writing and overall feeling it's not him (he also has created an account already, TheSyndicateProject), the account will be banned shortly. -- laagone (talk)  07:14, October 1, 2013 (UTC)

Sure, I'll help you.

I've created the template. To use it, type {{CoD6 Original In-Game Music}}. Sorry, but I can't add the template to the pages, as I have to go now, could you place it on the pages? Thanks.

I cannot find any evidence to support that this album exists.

The file was lacking a license and was created by pointing a camera at a TV screen, which is specifically banned under the file policy.

In general we prefer screenshots come from the PC version, as that's an easier version to cap. And deleting the metadata doesn't make it OK; it's still obviously an image made by pointing a camera at a TV screen.

If you're signed out and you make an edit, don't sign in, undo the edit you just made just to redo the same edit. That could be very easily seen as edit boosting. Conqueror of all Zombies (talk) 21:47, September 12, 2014 (UTC)

Don't sweat it man. You're still fairly new to the wiki, so the mistake is completely understandable, especially since it's the first time! But other than that, keep up the good work man! Conqueror of all Zombies (talk) 03:00, September 13, 2014 (UTC)

Hey Soap, why do you keep on editing the Black Tuesday walkthrough video? This can be seen as edit boosting.

How so? For all 5 of your edits have simply added an extra line. Also, not sure why you removed the message from my page.

Giving warnings to users who have already been blocked is a little bit unnecessary.

Congrats on obtaining rollback Soap! I'm sure you'll greatly benefit from this tool.

Last Warning to a user

Hi Soap and Congrats for you're Rollback and you're birthday, some thing I see you give a warning for his edit.( Click ), for a one mistake or wrong information it don't need to give vandalism warning, if that user do two time or more I think is better to give warning that time.

Hey Soap! Saw it was your birthday, and I decided to drop by and leave a message. You've been an extremely helpful editor these last few weeks. Happy birthday!

Sorry for not noticing earlier, this is the first time I've been on the wiki since the morning.

Thanks :P (I should probably have a better response to this, but this is all I can come up with right now)

I don't think that they deserve to be deleted, since the game itself is in Chinese. Anyway, I've removed the Chinese characters by cropping the images to prevent any misconceptions. --Ultimate94ninja (talk) 10:37, September 27, 2014 (UTC)

Hey Soap, you recently uploaded a duplicate image named "Cabin Fever CoDG.jpg". This was a duplicate image of this image. When uploading in the future, please make sure you don't upload duplicate images. This can be done by searching for the image to see if it is already on a page. Don't take this as a warning, just as a friendly reminder. Anyway, keep up the uploading, those images are looking fantastic! Capt. Miller 01:23, October 2, 2014 (UTC)

Hey Soap. Thanks for that I see you are working a lot. I sure you can get this award this month mate!

I am sorry for what I did. As I am a new editor to this wiki, I completely don't know the rules and regulations that is to be followed in this wiki. I don't have any intention to vandalize any page in this wiki. I was just trying to correctly punctuate the page. I need an escort for guiding how to edit throughout this wikia.

Anyway, thanks for messaging and warning me.

thank you very much soap shadow. ill try to remember to use that from now on for adding the soundtracks to the mw1 soundtrack. RisingSun2013 20:11, October 4, 2014 (UTC)

Hey Soap, congrats on acquiring 1000 edits! Hopefully your custodian request will be approved. :)

Your Request for Custodian rights has passed and I have granted the rights. Be sure to read over the custodian page for any further information should you need it.

Hey Soap, congrats on acquiring custodian rights! You'll definitely benefit from them with all the .ogg work you've been doing.

Congratulations Soap on the Custodian rights! Keep up all the hard work, your edits and images are fantastic! Also, I've added the Custodian tag next to your named. Capt. Miller 01:16, October 11, 2014 (UTC)

Can I please ask why you reverted this edit? The edit was a valid addition to the policy.

Either way you should assume good faith when reviewing an edit. Even though I wasn't logged in you still reverted the edit for no good reason, something that is quite disconcerting from a user with rollback rights. And we've always used "subst" in all our warnings to prevent users accidentally editing the templates when they try to reply.

I need to ask. But are you actually looking in to any of the anonymous users edits you revert? The user you just reverted had put in correct information, and the game files I checked back him up. Did you revert him purely because he was an anon, or because you have any proof to the contrary?

Just because information has been around a long time doesn't make it correct. And if you couldn't find a source to disprove the anonymous user, then you're not really in the clear yourself to revert the edit. I only ask because recently you've been undoing a lot of edits done in good faith with no real explanation given. Furthermore, when you give a "Bad edit" warning, you need to actually explain what was bad about the edit. Simply leaving the template doesn't help the user at all.

So i googled the BO zombies soundtrack

Are you sure that Zombe is the right word, i'm not convinced, i have read it as Zombies every single time...

It is even written that way on my digital download

Just a couple of links...

These all say Zombies instead of Zombe...

That could easily be a spelling mistake, also i assume that is the one that came with the rezurrection pack, which is the one i have, which was also called zombies, not zombe...i guess you could provide another couple of sources, i agree the ones i linked weren't the full editions, with the Easter egg songs on...but even then, I'm sure they wouldn't randomly change a song title betwen two releases

Well, i can't say i never saw it...it just seems very strange, more so because Zombe doesn't seem like a good word to use (Hence my spelling mistake suggestion)

Congrats on becoming User of the Month! Hopefully you'll get it again soon!

Your welcome, and thanks too!

Oh man congrats for your UtoM You really deserve it.

Retrieved from "https://callofduty.fandom.com/wiki/User_talk:Soap_Shadow?oldid=2163544"
Community content is available under CC-BY-SA unless otherwise noted.